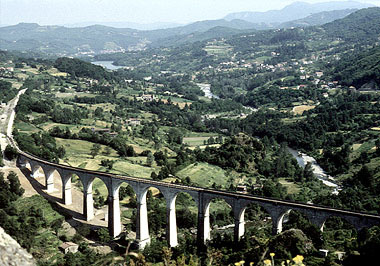 Mount Capriola, with its twin peaks (537 and 523 m. above sea level) dominates the upper valley of the Auser at its confluence with the torrent Edron. The Ligurian presence in this area, already interested by a settlement of the Final Bronze Age, is attested since the end of the IVth century b.C., though it is particularly substantial between the end of the IIIrd and the beginning of the IInd century b.C. when, under the continuous threat of the Roman army, the Ligurians were looking for a shelter in places protected by a mountain peak and particularly suited for sighting and surveying the territory (Monte Lieto; Monte Altissimo).
In the upper valley of the Auser, Ligurian settlements with the same characteristics as Mount Capriola were found near Mount Vigne (S. Romano in Garfagnana, 777 m. a..s.l.) and at Colle della Fame (Castiglione Garfagnana, 582 m. a.s.l.).
(text by SUSANNA BIANCHINI)

Remains are not visible; some findings are on display at the Permanent archaeological Exhibition in Castelnuovo Garfagnana.

The Bronze Age settlement was probably situated in the area around the lower peak of the mountain; an excavation probe, made in 1984 on the north-western side, has permitted the identification of a layer rich in charcoal, probably belonging to a temporary dwelling, hut or tent. The pottery finds, mainly ollae and streamlined bowls, can be referred to an advanced stage of the Final Bronze Age.
An excavation campaign carried out, again in 1984, on the northern side of Capriola (excavation area A), identified a heap consisting of the decayed rests of a Ligurian settlement, which might have been originally situated on the highest peak of the relief. In addition to a few pottery finds still belonging to the Final Bronze Age, fragments o black glazed pottery, fine earthenware (cups and jugs) of Ligurian production, impasto kitchenware and wine amphorae were also retrieved. Two other small dwellings (areas 1 and 2), probably simple cottages made of perishable material, were also situated on the southern side of the mountain.
Particularly abundant among the finds are fragments of amphorae datable between the IIIrd and IInd century a.D.; more abundant, indeed, than the impasto pottery, showing how widespread the consumption of wine already was among the Apuan Ligurians. The wine amphorae, that could be reused as containers for different foodstuffs, are a characteristic of all Ligurian settlements in this period.