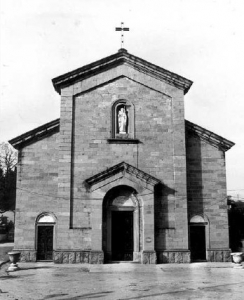 The church, of very early origins, was badly damaged by the earthquake of 1920 and substituted by the opportunely modified oratory of the Trinity. It contains a 14th century painting of the Madonna and Child attributed to artist known as the Maestro of Camporgiano.

The name Camporgiano derives from the Latin "Campus Regianus". The area was contested from the early middle ages by the local Lords controlled by the bishop of Luni, the Marquis Malaspina and the Lucca episcopacy. Only in the Castruccio Castracani period did Lucca consolidate its control, lost soon after however with the death of the leader. Afterwards Camporgiano returned to being controlled by Lucca in 1370 and remained so up until the Florentine siege of the town in 1429. Passing to the ducal family of Este, the town became the headquarters of the vicarship and, after a temporary assignation to Massa Carrara, returned to Lucca only with the proclamation of the Kingdom of Italy. The Papal "Privilege" of 1154 records a church at Camporgiano, initially named after Saint Cristoforo, and then Saints Cristoforo and Giacomo. In this document, as well as in the "Decime" of 1296-97, it results as belonging to S. Pietro al Castello, nowadays Piazza al Serchio, within the diocese of Luni. It was detached from this diocese, along with other parishes of Este Garfagnana, in the institution of the new diocese of Massa, with the Papal Bull of 1822. Only in 1992, with the reinstatement of diocese according to administrative confines, did it become part of the diocese of Lucca. Destroyed by the earthquake of 1920, the parish church was replaced, for the purposes of religious functions, by the oratory of the Trinity, promptly enlarged to meet these new requirements. To the right of the chapel’s presbytery, there is a 14th century painting, originally part of a larger composition, of the Madonna and Child, attributed to the distinguished artist known as the Maestro di Camporgiano. This artist, Lucca’s equivalent of Pisa’s Maestro of San Torpè, is the author of the fresco named “Madonna of the Roses” in the oratory of Lucca with the same name, where the influences of the grotesque language are still evident. The church also once housed an extremely interesting work, now at Villa Guinigi: a wooden statue of the Madonna and Child dating from the second quarter of the 14th century, attributed to Andrea Pisano.