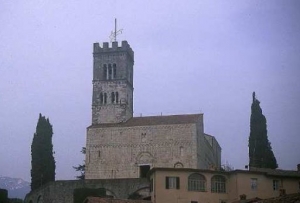 This church, dating to the 12th century, has a splendid, scenographic and unusual façade with a horizontal emphasis, important presbyterial, medieval interior furnishings and a singular, huge, old, wooden statue of the patron saint.

The Collegiate Church of Saints Cristoforo and Jacopo, improperly called a Cathedral, is documented first in 988, and again in 1048, as dependent on the nearby Parish Church of Loppia. However, these ties were soon loosened even if it didn’t loose its title: by 1244 the prior of Barga, by the delegation of the bishop, disposed of the canons of the Parish Church and in 1256 Barga received the honour of the christening font – the only case at the time -, until 1390 when its official qualification was changed by the bishop of Lucca. This gradual change of status was undoubtedly due to the progressive depopulation and repeated destruction that the Parish Church of Loppia experienced for the most part of the 13th century during the long series of legal disputes that saw Lucca and its clergy opposed to Pisa, faithful to the Pope, and Barga itself. Also, the new emergent community’s desire to free themselves from the powerful Rolandinghi family, owners of the territory of the Parish Church of Loppia, on behalf of the bishops of Lucca, undeniably played a role. The tumultuous political events of the 13th century resulted in Barga passing to Florence in 1331; on a religious level the scission from the diocese of Lucca was formalized in 1789, with this area attributed to the diocese of Pisa. The church’s present appearance is remarkable above all for the horizontal crowning of its façade and magnificent 12th century portal. The interior was repeatedly enlarged and modified, and, following the severe earthquake in 1920, radically "medievalized", while the external walls of the northern side and the façade were entirely dismantled and rebuilt. The central nave and two side aisles that are today finished by three deep chapels still feature the presbyterial marble backdrop with relief and inlay decoration and the connected ambo, highly refined products of the Guidi’s school, from the first half of the 13th century, and the huge, almost 4 meter high, wooden image of S. Cristoforo, until recently the object of ancient rites. The preciousness and richness of the 13th century interior of this church is also evident from the wooden Crucifix that was once displayed at the high altar along with the other protagonists of the Deposition (now conserved in the nearby church of S. Elisabetta,) and an unusual, Islamic, carved marble pyx-reliquary. There is also an early 15th century silver astylar cross and a painted cross, by the eponymous maestro of Barga, a still anonymous artist who in this work clearly took inspiration from Jacopo delle Quercia.