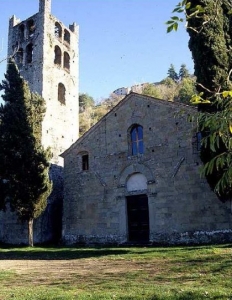 With 10th century origins, this parish church was renovated in the 13th and 14th century, when it received its present day arrangement of nave and two side aisles. Abandoned following the development of the overlooking village, it has recently undergone restoration.

Documented as a Parish Church as early as 918, it results as still greatly active in 1260 when it headed a relatively moderate parish area corresponding to the central part of the course of the River Lima, with the subordinate churches of Cocciglia Cerageto, Matriceto and Surignana. Of these, only the churches of Cocciglia and Cerageto have survived, although the latter has lost its medieval appearance, and the other two are in ruins. This area, in part belonging to the Holy See, possibly due to donations by the marquise of Tuscany in the 11th century, was previously owned by the political association of the aristocracy of Corvara, and then formed part of the Republic of Lucca in the early 14th century. In the domain of Lupori, it was then included in the Vicarship of Val di Lima. The isolated position of this church, at one time functional in being on the ancient road that linked Val di Lima with Val di Nievole and easily reached from all the surrounding communities, and the development of these villages, especially of that nearest which was fortified and long preserved the castle of the same name, probably led to its premature decline. In the early 16th century, in the by then well-established village of Casabasciana, an oratory dedicated to S. Pietro was enlarged for local use, today a parish church by the same name of the old parish church. The "Pastoral visit" of 1553 reveals that the former oratory was no longer in use for the Holy Mass, and the following "Visit" of 1686 records the old building as already in ruins and totally abandoned, so much so that livestock grazed in the adjoining cemetery. The old church, dating to the 13th – 14th century, as testified by the escutcheon visible on the capitals, was restored in the nineteen-sixties. The plan of a nave and two side aisles are divided by columns, whereas the apse maintains remains of a crowning of small arches possibly reused from the previous building of which traces of the apsidal perimeter have been found beneath the present floor level. Francesco di Valdambrino was commissioned for the wooden statue of the Annunciation, now kept in the new Parish Church.