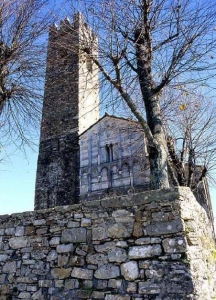 The striking Church of S. Cassiano in Controne is the first to be recorded in Val di Lima, in documents from Lucca dated to 722. With its façade with a profusion of Longobard sculpture, it still remains a fascinating enigma for scholars and tourists alike.

The Controne area extends over the hill to the right of the River Lima, near the confluence with the River Serchio, in an area full of some of the oldest villages in the Lucca region, belonging originally to a single extensive parish that included the mountain towards Coreglia. In the 8th century the church was directly owned by the bishops of Lucca, but at the end of the 10th century the Fraolmi, from the political association of the aristocratic families of Corvaia and Vallecchia, took over. Although the Church of S. Cassiano never reached the status of parish church (in fact, in the 8th century it results as dependent on the Parish Church of S. Giulia and then on the nearby Parish Church of S. Giovanni in Controne) it has a basilican scheme, with a central nave and two side aisles divided by columns and pilasters, generally reserved to mother churches. Using the documents regarding the pastoral visits, we know that the old church had serious problems of stability between the end of the 15th and mid-16th century, particularly regarding its foundations, the right aisle and the façade, where a deep crack had opened. In effect, signs of the subsequent restorations are clearly visible, as are the results of the heavy 18th-19th century reconstructions (which had meant among other things the demolition of the semi-circular apse and its replacement with a square one), partly eliminated by a restoration at the end of the 19th century that actively involved the whole local community. The exact date of the façade, with its striped walls and arcades, is difficult to determine. There is indisputably a ceramic basin from the end of the 11th century in the upper part. Numerous archaizing sculptures appear all over the external face that is up against the pre-existing bell tower (datable to the 10th century) and particularly on the façade and internal capitals. These form a contrast with the style of the arcades inspired by the Pisan tradition. Of great interest is the early presence on the bell tower of blind arcades and encased lozenges, held to be the work of the inventive and learned Buscheto, the architect of the Cathedral of Pisa.
The church, with its original, marquetry, marble, interior floor, also features, besides a valuable collection of goldsmith’s work, an important patrimony of wooden sculpture including a Saint Antonio Abate from the end of the 14th century, a statue of Saint Ansano and a Crucifix from the early 15th century, both by Francesco di Valdambrino. An Annunciation from the first half of the 14th century and the partly mutilated Saint Martino on Horseback by Jacopo della Quercia, possibly from the Cathedral of S. Martino, are now found in the rectory.