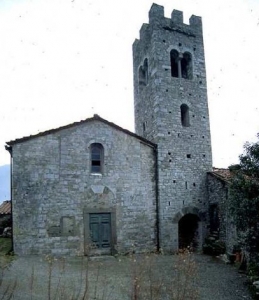 First documented in the 10th century, the apsidal part of this old Parish Church is still intact, making it one of the most interesting examples of medieval architecture in the Lucca area.

A document from 995 mentions a Baptismal Parish Church "Domini et Salvatoris et S. Fridiani et S. J. Baptiste" in Mozzano which served many of the surrounding communities. The "Estimo" of 1260 lists the Parish Church, without specifying its name, as having five dependent churches and an oratory. However, the churches in some of the locations documented from the 10th century as belonging to this parish came to be listed under the Parish Church of Diecimo. This decline is possibly related to the weakening of the Suffredinghi Aristocracy, who owned estates in the region which gave them rights over the parish church, from which they still drew financial benefit in 1225. After being defeated by Lucca, they lost their fortalices of Cune and Anchiano in 1169, and Rocca di Mozzano in 1227. On the other hand, in nearby Diecimo, the Episcopal domain was strengthening. In effect, the decline of the Parish Church was premature. In the 13th century it documented as having limited financial resources, and naturally the church at Borgo a Mozzano was evidently enjoying a period of great expansion. In fact, the rector and congregation of the latter boasted their own christening font in 1294. In the following years the old Parish Church, while formally continuing to carry out its functions, is described in the "Visit" as in a state of neglect and isolated, such that, towards the end of the 16th century, it was substituted by the church of Cerreto that inherited its title and dedication. The Parish Church is in an isolated position from the communities it served, surrounded by a small group of houses which pre-date its construction. Despite gaudy interpolations that hinder an exact interpretation, the façade and plan can be dated to between the end of the 11th and start of the 12th century based on the type of decoration, the way the bell tower is connected using a large, high, arch under which passes the old pathway (as in nearby S. Lorenzo in Corte di Brancoli), and the form and working of its square, white limestone blocks, clearly visible on the front of the apse. The interior features a simple, hexagonal christening font, while the other furnishings have been almost entirely transferred to church of Cerreto, including a large Madonna and Child on the Throne, recently attributed to Francesco di Valdambrino.