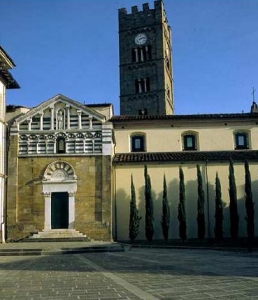 This church formed part of the Altopascio Hospital run by the Religious Order of the Knights of Tau who assisted pilgrims, wayfarers and the poor and treated the sick. Of the 12th century church remains the bell tower and the sculpture laden façade that forms the transept of the present building, resulting from enlargements in the 19th century.

The hospital, which included the church, dates to around 1000 A.C. Towards the end of the 11th century it received praise and prerogatives from the bishop of Lucca. During the 12th century it strengthened its economic base with legacies and purchases until owning several properties throughout the diocese. The first record of the rule of the Order dates to 1239, although it had undoubtedly been drawn-up some time before. In the same year the Pope issued an authorization to the monks of Altopascio to embrace the rule of the Friars of S. Giovanni of Jerusalem, marking a turning point in the history of the Order, that obliged its followers to perform strictly therapeutic activities, renouncing the giving assistance of a logistical-military type to pilgrims that had given it jurisdiction over the maintenance and surveillance of bridges and roads. The Papal concession also foresaw the Hospital’s liberation from the bishop’s authority, and its direct dependence on the Holy See. This also meant that the church became a subsidiary of the Parish Church of S. Piero in Campo. Granted to the Capponi of Florence in 1472, it was then suppressed by Cosimo I who assigned its assets to the newly-constituted Order of the Knights of S. Stefano of Pisa. As most of Val di Nievole, Altopascio had been under the control of Florence since 1338. In 1519, the Pescia area was promoted to diocese, separating it from Lucca. Altopascio, along with most of Val di Nievole, then belonged to this new See. Following the much disputed renovation works carried out between 1827 and 1830, that which remains of the medieval complex is limited to the cloister, some pilgrims’ environments, part of the walls of the castle, the church’s façade (now transept) and late 13th century bell tower, which constituted, with the tolling of its bell, a landmark for those travelling through the marshland of Bientina. The late 12th century façade is divided into small loggias, following a scheme common to the area (Pieve S. Paolo, S. Michelino of Pescia), but the rich structuring of its components draws on both of the influential model of the Cathedral of Pisa as well as the religious architecture of Pistoia of the time. The façade features the statue of the benedictory Redeemer, by Biduino, since there was diffusion in Tuscan churches at the time of narrations of sacred history sculpted in an archaizing language. This, and other relics now housed in the Villa Guinigi Museum, are proof of the decorative richness of the original building.