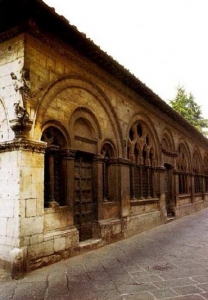 The church itself dates to the early 14th century, but it also includes a section of roman wall. Its cultural importance also partly stems from the presence of a much venerated 14th century painting, long believed to have miraculous properties.

The present day plan of central nave and two side aisles results from a 15th century renovation. The church was built near the archiepiscopal palace in 1309 by the University of the Merchants of Lucca, altering a small oratory built where an image of the Madonna and Child held to have miraculous properties had been found. The oratory, having been taken over by a confraternity, was again renovated and extended in 1333, switching its orientation to a north-south axis. The façade was completed in the late 15th century with a portal held to the work of Matteo Civitali. The internal plan also results from 15th century alterations, and is divided into a nave and two side aisles separated by columns and covered by cross vaults. The decorative elements added in the 17th century were greatly altered in the 19th century when the southern side of the church was worked on in the aim of restoring the old windows, and in 1890 Michele Marcucci restored the lunette frescoed with episodes of the life of the Virgin Mary. There is a Madonna della Rosa at the high altar, moved there in 1609 from its original position at the northern wall. Unfortunately, this operation seriously damaged the painting causing the loss of the images of the Saints Pietro and Paolo, co-titulars of the oratory. The painting is one of the finest examples of 14th century painting from Lucca, for its early and free interpretation of Giotto’s teachings, and most of all important for the history of the Marian cult in the town. It is said that at a time when the town was still defended by the old roman walls, a number of shepherds used to graze their sheep at this particular point. A young shepherd, who was dumb from birth, was puzzled by the fact that his sheep avoided a particular green bush. On closer inspection and with great surprise, given that it was January, he found a rose in full bloom. Upon picking the flower, and taking it to his father, he miraculously gained the powers of speech. Informed of the event, the bishop revealed that near this bush there had once been a sacred image of the Virgin Mary and Child holding a small branch with three roses. Shortly after, a small oratory and confraternity were created here. In 1574, Giovanni Leonardi founded in this church the initial nucleus of his congregation today of the Regular Priesthood of the Mother of God, then resident in the church of S. Maria Corteorlandini. In 1923, the church was inter-parochial in that it was owned equally by the parishes of S. Martino and S. Maria Forisportam. The corpse of Martyr Saint Felice was beneath the high altar, the altar of the Visitazione kept the body of Martyr Saint Demetra and the altar of S. Anna held that of Martyr Saint Vittorino coming from S. Giovannetto (having been removed from the cemetery of Callisto in 1641). With the Napoleonic suppressions the oratory was used for salt storage. The miraculous image was temporarily held at the archiepiscopal palace, but it was put back in place in the Restoration period and restored by Michele Ridolfi.