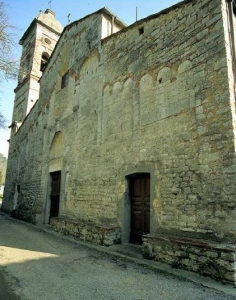 This is one of the oldest parish churches in the diocese, located in the west of the Lucca plain at the foot of Mount Quiesa, in a dominant and isolated position in relation to the parish that was made up of not one but many small communities scattered around. Its unusual characteristics have continued to draw the attention of scholars since the second half of the 19th century.

The Parish Church of Arliano was probably one of the first to be founded in the diocese of Lucca. Referred to as S. Martino, it was already considered to be of old tradition in the earliest records dating to 892, and of a higher hierarchical level such that its priest is referred to as "archi presbyter". In the 10th century it assumed the addition titles of S. Pietro (980), which it subsequently lost, and S. Giovanni Battista, which went on to prevail. Documented in 1140, the parish Church appears to experience a progressive decline between the 13th and the 14th century. The "Estimo" of 1260 reports its low income compared to other parish churches. In 1278 it appears to have lost its burial rights to dependent churches. Between the 13th and 15th century, it was so poor that it could not maintain a permanent parish priest. It therefore became increasingly reliant on some of its formerly dependent churches, who participated in covering the expenses of the most urgent rites and ceremonies. Perhaps due to improved management or an increase in the number of parishioners, or even because it was entrusted to exponents of the Lucca aristocracy, the church did re-find stability from the late 16th century. In the first half of the 17th century it was renovated and redecorated, the rectory and vestry were built and the open gallery was erected, although the bell tower, which had fallen in 1667, would have to wait until the mid 19th century before being rebuilt, when the organ (1878) and stone vaults (1840-1846) were also added. In the 17th century the church had three altars, the high altar, that of the Vergine del Carmine in the left nave and that of the Madonna del Rosario in the right, both maintained by the two confraternities of the same name. In the 18th century a new altar was added dedicated to the Holy Trinity. The Carmine altar was designated to conserving the Holy Sacrament. The church holds evidence of the existence of a confraternity dedicated to the Holy Mary’s Presentation to the Temple. The Church of Arliano is undoubtedly one of the oldest medieval buildings in the Lucca area even if it is difficult to give it a precise date. It is acknowledged as a prototype from between the 9th and 10th century for its shortened three-nave plan with the central nave considerably higher than the side aisles, the massive supports and the external decorations with pensile arches on thin pilasters. Before its collapse, the bell tower used to be above the first bay of the left nave, sharing the façade of the church. A fragment of roman frieze from the Augustaean period, reused in a pilaster, is of interest. The church houses important works of art, including an early 14th century cross astylar, a christening font, also from the 14th century and a marble niche of the Virgin and Child and Angels from the mid 14th century, attributed to Nino Pisano.