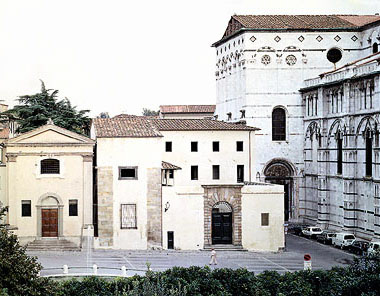 Founded by the Cassa di Risparmio di Lucca and opened at the end of 1922, the Museum is housed in a complex consisting of a XIIIth century tower house, a XVIth century church and a XIVth century main building. The Architectonic complex that contains the Museum of the Cathedral is therefore composed of three buildings, erected in different periods between the XIIIth and XIXth centuries and variously connected according to the needs.
In converting this architectonic complex into a Museum care was taken to restore and preserve both vertical as well as horizontal structures, creating exhibition space on a series of communicating offset levels. Inside the Museum are on display objects of art that prove a century long tradition of devotion and affection to the Cathedral and the Volto Santo figure, an ancient crucifix, object of worship since the Middle Ages when it was known in the whole of Europe.
Altar cloths, liturgical objects, choir books, sacred silverware and paintings, together with many marble statues and fragments all come from the Romanesque Duomo.

Since the Early Middle Ages, the Cathedral of Lucca has collected altar cloths and liturgical objects, necessary for particular sumptuous holy celebrations; it has also undergone radical architectonic transformations and changes of its interiors. In this way a large heterogeneous collection of high quality and historically relevant works of art, scattered between church, sacristy and various deposits was created; it was therefore scarcely visible and out of context. Some objects can now be seen in Lucca's National Museums, that of Villa Guinigi and that of Palazzo Mansi, while others, of vital importance for a reconstruction of the fortunate Medieval and Renaissance seasons of art in Lucca, are exhibited in the Museum of the Cathedral, opened in 1992.
The jewellery belonging the Volto Santo statue is a particularly significant example of the artistic treasures that are to be found here. At the end of the XIth century this sacred image of Christ, now kept in the Cathedral, gave origin to an intense cult in all Europe. For this reason the holy image was always adorned with precious vests, part of which used when it was dressed up for the feasts on May 3rd and September 14th : ornaments used to gird Christ's vest as well as sandals, a crown, a collar and the magnificent jewel, of French origin, that used to decorate his chest, can all be seen in the Museum.