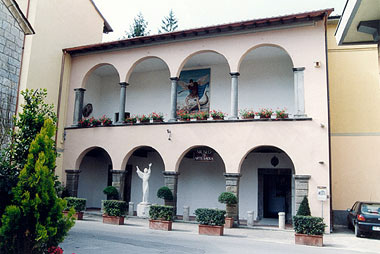 In 1936, in a XVIIth century building, seat of the Confraternita di San Michele e San Vincenzo, the Museum of Sacred Art was set up. In origin it was simply a place where paintings, vestments, altar cloths, holy vessels and other sacred objects of the XIVth - XVIth centuries were collected and kept, in particular those exposed to theft in country churches.
At present the Museum is being reorganised and rearranged; two new rooms on the ground floor contain wooden sculptures, paintings and precious jewellery. On the upper floor, in the hall of the Confraternity with its eighteenth century stalls, is a large Flemish tapestry dated 1516; in the remaining rooms a large number of paintings, wooden items used in processions, altar-hangings and sacred silverware made in the XVIIIth century by Lucca´s best craftsmen are exhibited.

The exhibition begins on the ground floor with a small wooden figure of the Virgin Mary with Child dated to the end of the XIIIth century; nearby enamelled goblets of Sienese style and the embossed procession cross, dated to the beginning of the XIVth century, from the church of S. Maria Albiano are exposed. Other embossed procession crosses, a chalice, a wooden figure of S. Antonio the abbot and the "polittico dell'Anguilla", together with other objects scattered in different churches of the Camaiore region, prove how the artistic culture that developed in Lucca between the end of the XIVth and the beginning of the XVth century penetrated deeply and extended its influence to the surrounding rural areas.

Seat of the Confraternita del Santissimo Sacramento, Via IV Novembre, 71