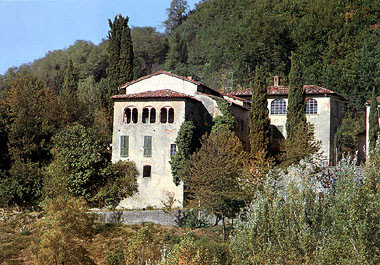 The poet Giovanni Pascoli, in search of a quiet, peaceful place where to live and write his poems, chose Castelvecchio di Barga.
He moved there in October 1895 with his sister Maria and his dog Gulì, renting the country house of the Cardosi-Carrara, that later, in 1902, he bought. Here the poet spent the most peaceful years of his life until his death on the 6th of April 1912; and here he composed his most famous lyrical works: The "Primi Poemetti" (1897), the "Canti di Castelvecchio" (1903) and the "Poemi Conviviali" (1904).
After his death, the sister Maria, took care of Pascoli´s inheritance for 40 years; she faithfully preserved the structure, furniture and arrangement of the house. It was only after her death, on the 13th December 1953, that the house was bequeathed to the Municipality of Barga and underwent changes and improvements such as the installation of electric light.
The house, now a national monument, is a three storey building surrounded by an orchard and a garden with a private chapel, restored by the poet in his lifetime, where he and his sister Maria are buried.

The house on the hill of Caprona was built by the Cardosi-Carrara family in the middle of the XVIIIth century as country residence. Pascoli used to say jokingly that he had bought the villa thanks to Horace and Virgil because part of the money came from the sale of 5 gold medals he had won in the Latin poetry competition held in Amsterdam. In the peace of his study, fondly cared for and far from academic burdens, Pascoli cultivated his love for the Latin language and poetry. The three storey building has seven rooms and preserves the structure, furniture and arrangement that it had at the time of Pascoli's death.
In the study on the 1st floor are his books: Pascoli's library contains 12000 volumes and can be consulted upon request; the archive on the ground floor, instead, contains manuscripts and a collection of periodicals up to 1935. The poet's archive is one of the richest in Italy with 61000 manuscripts divided into three sections: Pascoli's letters, autographs of his works and the letters of his sister Mariù. On the second floor are the poet's study, a library and drawing room that opens on the so called "Altana", a terrace covered with bells from where you can enjoy the panorama so often praised by the poet in his works.

• Poets and musicians between nineteenth and twentieth century