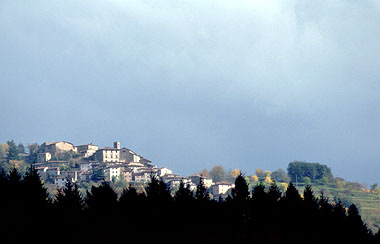 The origins of Sillico are medieval. It lies on the buttresses of the Apennine overlooking the alluvial plane and the village of Pieve Fosciana.
It is an ideal observation point above the valley, in a strategic position facing the fortified town of Castiglione and the fortress of Montalfonso and Castelnuovo Garfagnana.
The village with its many old buildings, among which several noteworthy Renaissance mansions, is built around a hill in concentric rings; on the hilltop we find the medieval tower, so that, in order to reach it, we have to pass through the ancient labyrinth of the village.
The tower is one of those garrisons with small towers that used to guard villages and roads, in this case minor roads across the Apennine, that lost importance with the achievement of large garrisoned fortresses in the Serchio valley in the XVIth century.

The tower is a quadrangular construction with thick walls of roughly hewn local stone; it originally had two storeys, but now it is ruined and only 9 metres above ground level. Inside the tower we can see remains of a second stone building.

The castle was in the front line, together with other communities of Garfagnana, during the harsh battles of the XIVth century and was seriously damaged; in 1401 Paolo Guinigi, ruler of Lucca, included it among the forts of the upper Serchio valley that had to be repaired and supplied with arms.
In 1429 Sillico was the first place in Garfagnana to accept of its own accord the protection of Niccolò d' Este and in doing so escape from the control of the Republic of Lucca.
The Dukes of Este, besides granting tax exemptions to the inhabitants, also promised to defend them from any aggression, reinforced the castle and surrounded the village with walls.
The tower was part of the village's defensive system and was situated at the north gate. The outer building contains another smaller one; the latter is also square and now rises at most 3,50 metres above the ground though it originally had 2-3 storeys with wooden ceilings. From an exam of the masonry we can affirm that this structure dates back to the XIIth-XIIIth century and is so older than the outer tower. Therefore we can suppose an evolution of the building: when the first tower no longer met the needs of war it was pulled down to a large extent and surrounded by the new construction. This is datable on the basis of documents as well as its material characteristics to the first half of the XVth century, that is to say not long after the inhabitants of Sillico submitted to the Dukes of Este, who left a keeper and two armed men to guard the community since 1430.