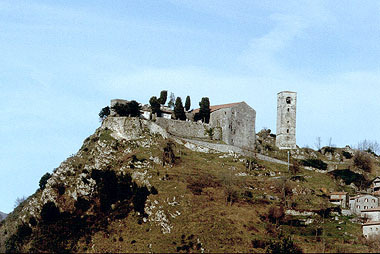 It lies south-west of Castelnuovo Garfagnana on a suggestive cliff overlooking the valley of the torrent Turrite Secca, in an inaccessible position ideal for defence. At the foot of the rocca is the small village of Sassi di Sopra. The fortification is part of a larger composite complex, in part destroyed, including the medieval church of San Frediano, the graveyard and the ruins of a tower on the ridge facing Castelnuovo. The fort, though small, is strategically relevant on account of its inaccessibility and position controlling the torrent Turrite as well as the upper and middle Serchio valley. Its walls are made of squared stone blocks and rubble and enclose both church and cemetery. A cylindrical tower guards the most vulnerable sector, i.e. the side facing the village of Eglio; another, now ruined, used to control the Sassi side. The main gate with guardhouse used to be where now the graveyard entrance is; changes to the complex in the past as well as the more recent creation of a graveyard have considerably altered the whole structure.

From the beginning of the XXth century part of the rocca complex was used as graveyard, some buildings and their annexes were demolished, others abandoned. In the past part of the grounds had already become private property and had been transformed into fields. The clearing away of wild vegetation brought to light the tower on the western side of the monument. Recently the Municipality promoted works of restoration and consolidation on the bell tower of the church of S. Frediano.

The old medieval structure, whose real consistence is difficult to estimate, was demolished in 1370 following the wars that broke out in that year when Castruccio Anteminelli's heirs tried to recapture the Guelph territories that had submitted to Lucca.
When Sassi, like the overwhelming majority of communities in Garfagnana, became part of the Duke of Este's dominions, the fort was rebuilt and expanded as it came to lie right next to the border with the Republic of Lucca and its nearby Gallicano, Perpoli and Fiattone possessions; it so became, together with Trassilico and Ceserana, one of the garrisons guarding the southern frontier.
Moreover, its proximity to Castelnuovo, capital of the Province of Garfagnana and exposed to raids from Lucca because it only had an old circle of walls built by Castruccio to defend it, made Sassi the ideal refuge for the town's inhabitants in case of siege. The Dukes of Este maintained a garrison here, quite modest to tell the truth, as a list of the supplies and arms for the year 1488 proves.
During the Florentine invasion of Garfagnana in 1512 the rocca was besieged and taken by mercenaries paid by the Republic of Lucca in an attempt to take advantage of the weakness of the Dukes of Este, involved as they were in a war against Pope Leo Xth of the Medici family; however, as soon as the outcome of the war became clear, the fort was handed back to its legitimate owners.
With the beginning of the XVIth century the relentless decline of the rocca started: it was abandoned and in 1537 Duke Ercole granted it to one of his subjects, Jacopo di Mariano of Sassi, in recognition of the courage shown by his father during the siege of Lucca's troops in 1512, provided that, if the necessity arose, he could always use it to shelter men and store provisions. As a consequence the structure began to decay progressively and we know that by the first half of the 17th century it had lost all military and defensive functions and its grounds had been simply converted into fields.
After the collapse of the bell tower, originally incorporated in the church, at the beginning of the 18th century a new one was built not much further.

• Man and his territory in Garfagnana