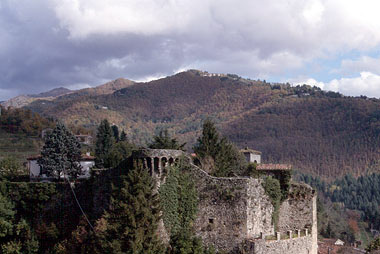 Coming towards Castiglione already from afar it is possible to see the imposing walls that stretch for 750 meters, with a planimetric shape in the shape of an irregular quadrilateral. You enter the urban circle through one of the four doors placed on each side of the walls. At the top and at the gates, six tall cylindrical towers are attested. On two of these we find place, since the sec. XVIIth, the bell towers of the main churches of the town: S. Pietro (the oldest, consecrated in 1197) and S. Michele (XIIIth century). Going up to the church of S. Pietro you get to see the fortress, the highest part of the village, currently privately owned. It was a structure for exclusive military use used as a residence for the castellan and the garrison where, in special rooms, weapons and gunpowder were kept. The complex has an irregular planimetric trend, has three high cylindrical towers crowned by corbels, and a lower building to defend the only entrance door. Another portion of the fortification is governed by "Sardinia", a large area located on the north side of the country and enclosed by another section of walls with two towers, once a waste storage area, now transformed into fields to be cultivated.

In the 19th century, when unused garrisons were demobilised, the Rocca was sold and became a private residence; a bastion and some portions of its walls, that were incorporated into houses, shared the same fate. At present the Municipality of Castiglione, who owns the rest of the complex, is doing its best to preserve and enhance the whole fortified town, considered to have been one of the most important in the whole Serchio valley.

The origin of the fortified complex goes back to the Early Middle Ages, though the only thing we know about the original fortification is that it was completely destroyed by Lucca in 1170. Rebuilt and once again besieged, after the 1371 peace treaty the small town definitively passed under Lucca, that expanded the walls and reinforced the entire fortification around 1390.
Castiglione was one of the communities in Garfagnana that, contrarily to the majority, refused to accept the rule of Ferrara's Dukes, remaining loyal to Lucca. For this reason in 1603 and again in 1613 the town was besieged by the artillery brought from Modena: walls and rocca were under fire for several days and long sections of the curtains were destroyed. From 1617 onwards, after the territory of Garfagnana was officially handed over to the Dukes of Este, almost two centuries of uninterrupted peace followed. The walls and the rocca of Castiglione then lost their military function and in the nineteenth century, when all unused garrisons were demobilised, the Rocca, like other fortifications in the area, was sold and became a private residence.