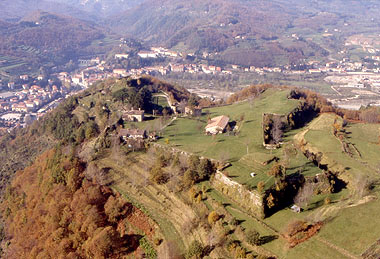 The defensive complex of Mont'Alfonso qualifies as the most important military architectural emergency of the Garfagnana and dominates the underlying village of Castelnuovo from a hill of 453 m.s.l.m. It was designed by the ducal architect Marc'Antonio Pasi and built between 1579 and 1586 as a stronghold, it is a defense against the enemies of Lucca and Florence. The imposing complex of the Serchio valley is surrounded by a wall in the pebbles of the river which is more than a kilometer long, interspersed with slits for the use of small firearms and protruding sentry boxes. Seven powerful pentagonal ramparts alternate with the two-arm curtain, on whose sides the gunboats open to house the large-caliber artillery - the fortress had a prestigious arsenal of cannons (a view is visible at the North Gate) - and distributed according to an irregular pattern that adapts to the morphology of the terrain. The main entrance (Porta Nord or del Capitano Rinaldo), controlled by the guard, is controlled by a register superimposed on the walls facing the city of Castelnuovo; on the opposite side to the south of the entrance (Porta Sud or del Capitano Terenzio) with the same characteristics as the other door it faces the hamlet of Torrite; while the "emergency door" opens towards the countryside as an escape route in the event of a siege. Inside there are six hectares of surface, seven emerging buildings and various foundation footprints, a certain arboreal heritage with modeled embankments, avenues and well-defined access paths; externally the connection with Castelnuovo di Garfagnana is guaranteed by the provincial road and the assigned path of Ariosto. Inside the curtain wall located on the highest top of the hill stands the ancient fortress dating back to the year 1000 to defend the original small village of Monti. In 1800 the same was used as a prison and remained so until the terrible earthquake of 1920. Mont'Alfonso was a place of estrangement and suffering as said seat of the prison term, but even more painfully was the witness of the holocaust, forced home of many Jewish families who lived in this area of ​​poverty until the deportation to Auschwitz.

From the XIXth century the fortress was used as a prison; it later passed into private hands, when buildings and grounds within the walls were used as farm.
The purchase of this monument by the Province of Lucca and the subsequent work of restoration co-ordinated by the Monuments and Fine Arts Office (S.B.A.A.A.S.) of Pisa with the contribution of the Apuan Alps National Park Authority, marked the beginning of a conservation project of this precious building.

In 1561 the inhabitants of Castelnuovo, that lay below in the valley and was so exposed to the attacks of Lucca, deemed necessary to reinforce the rocca, anciently known as 'Monti', until then an administrative building and residence of the Duke of Este's officials. In 1578 Duke Alfonso IInd, with the financial contribution of the villagers, entrusted the architect Marcantonio Pasi with the preparation of a project for the new walls.
The following year work was started according to Pasi's plan with twin bastions like at Verrucole. The walls were completed in 1584 and work then concentrated on the buildings within. In 1585 'Monti' was renamed 'Montalfonso' in honour of the Duke and equipped with the latest artillery. At the centre of the fort were a great cistern to collect rainwater, an underground casemate with a spiral staircase and the headquarters. Later, in 1617, a melting oven was added in order to reduce the considerable expenses of providing ammunition for heavy artillery.