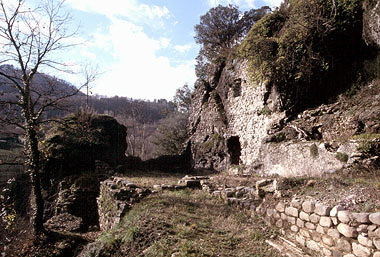 The Bacciano fortified complex was perhaps one of the first castles to be placed on a height just above the valley floor; this was the valley's most ancient defence system, completed by other fortifications at a short distance one from the other along the river. It was therefore conceived for a short range control of the surrounding territory, with its roads and river crossings. This system of dotted fortifications reflects the local character of medieval seigniory with small potentates sometimes linked by family ties.
Access to the fortified complex is through the remains of a gate on the south where a massive wall overlooks the river and the valley floor. The abandon of the complex in the past and the following transformation of the site for agricultural purposes have resulted in substantial changes to the original structure of the buildings but have not damaged structures deeper down in the ground; it is therefore possible to reconstruct the outline of the walls and of all the inner structures so as to appreciate fully the historical significance of this medieval complex.

The Bacciano complex consists at present of a series of ruins on a rocky ledge guarding the bridge over the Serchio. On the highest part we can see rests of an irregular quadrangular tower, a series of ruins and foundations, as well as rests of the wall curtain connecting the lodgings to the military structures. The most conspicuous remains are those of a two storey building, maybe the keeper's house, with an outer wall leaning against the face of the rock that replaces part of the building. Recent excavations have brought to light the site, until then overrun by vegetation and hidden by the debris of collapsed structures, partly demolished in order to turn the area into cultivated terraces.

At present the place-name Bacciano refers to a small group of houses not far from the hamlet of Villetta; originally, however, this was a bigger village with a church named after S. Lorenzo, a nunnery and a small castle. The castle, together with the nearby fortress of Capriola of which little remains, was the residence of the Lords of Bacciano, a small local seigniory first mentioned in 1065 that extended its influence to neighbouring territories and in particular to those of the parish of Careggine. The fortress was part of a system of garrisons and watch towers along the network of roads and in particular along the Serchio and Edron valleys, gateway to the Apuan Alps and the castles of allied families on the Versilian side. Moreover the castle, near to the road and to the ruins of the medieval bridge across the Serchio, was in an ideal position to guard the passage and collect the tolls. The ruins, together with potsherds and two 'denari' minted in Lucca showing the head of emperor Henry, found during recent archaeological excavations, prove that the site was fortified between the XIth and the XIVth century. When the castle no longer played a military role the structures remaining on the roadside, perhaps just ruins, continued to be used as a shelter by wayfarers. We can still see nearby the abandoned buildings of the 'Osteria Nuova', though nothing remains of an alleged 'Osteria Vecchia', maybe situated within the old castle.

• Man and his territory in Garfagnana