The tower of Sommocolonia 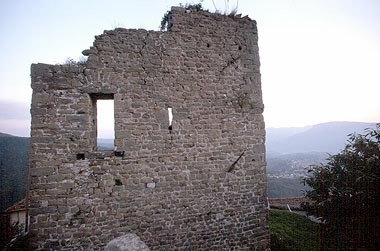 Sommocolonia lies on a buttress of the Apennine, on the back of Barga. The landscape is represented by mountains gradually sloping down towards the alluvial plain where the main town lies; the slopes are terraced and cultivated and, higher up, covered by thick chestnut woods. The village is built in concentric circles around the highest part where the tower stands; the church is inserted in this urban pattern, in the past filled with buildings, that has now grown thinner owing to the destruction caused by earthquakes and WWIInd bombings. Of the wall curtain, originally double, only the highest portion under the tower remains today.
The castle of Sommocolonia, built high up in an inaccessible position, overlooked a good portion of the Serchio valley and was of great strategic importance for the defence of Barga; it also controlled historic roads across the Apennine.
The changes due to the destruction of great part of the ancient walls and the tower have not, however, completely cancelled the historic character of this ancient fortification whose ruins can still be fully appreciated today.

The rocca had an over 150 m long perimeter with two quadrangular towers and a cistern inside; the northern tower was demolished in the XIXth century, the other was in good condition until 1920 when it was damaged by an earthquake. In December 1944 the tower was hit by a bomb that also destroyed three of the four curtain walls; it is now a ruin. Since then there have been only minor repairs to prevent a complete decay of the structure, menaced by the growth of wild vegetation. Recently the municipality of Barga has prepared a plan to restore and recover the whole fortified structure.