The tower of Matilde 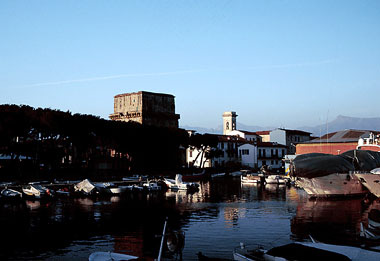 In the part of Viareggio towards Migliarino Pisano, the fine Torre Matilde stands out against the sea on the Darsena Toscana near the mouth of the Burlamacca canal. Outstanding example of XVIth century military architecture the tower is the most characteristic historical monument in Viareggio. Its name is due to the fact that it was wrongly ascribed to Matilde of Canossa, the countess who lived in the XIIth century. The restored interior of the tower has three storeys, a terrace and a room containing the cistern. The upstairs rooms have a surface of approximately 8 m wide and 6 m high with a metal staircase and the central winze. The cistern for rainwater is under ground level and can be reached through a trapdoor.

From the 19th century until the end of WWIInd, Torre Matilde housed a prison. Its original structure came to light after a series of interventions by the Monuments and Fine Arts Office (S.B.A.A.A.S.) of Pisa in the decade 1970-1980 that removed the internal partitions necessary when it was used as prison.
The building, now in good condition, is used for cultural events and temporary art exhibitions.

Torre Matilde is emblematic of a story that from the beginning of the XIIth century onwards inevitably links the vicissitudes of Viareggio's territory to Lucca's expansionist policy. In the intent of gaining an outlet to the sea Lucca had indeed occupied the territory of present day Viareggio since the Middle Ages, fighting off and opposing her rivals by building strongholds along the coast.
A "Castrum de Via Regia", erected together with the allied Genoese in 1172 in place of a wooden tower, is mentioned as signal tower and guard post against sudden enemy raids. When the castle of Motrone was destroyed in 1441, the 'castrum' of Viareggio became the only coastal outlet for Lucca and extensive drainage works were carried out on the surrounding territory. In the course of the centuries the sea withdrew and the castle gradually lost its role of defending the sea port on the canal. So a new tower, the present day "Torre Matilde", begun in 1534 and finished in 1542, was erected. The work was carried out under the direction of Tommaso Montecatini, Jacopo Arnolfini, Martino Bonvisi, Bernardino Cenami, Filippo Calandrini and Francesco Balbani and ashlars from the partially demolished old castle were used. Later, the construction of a new building, destined to become the house of the 'Commissario di Spiaggia' whose task was to control the movement of goods, was undertaken; the 'Commissario' also represented civil and criminal law. Tower and castle communicated by means of an open gallery. Like the castle, the tower also lost its defensive role on the canal, approximately two centuries later, when the sea withdrew further still.

• Modernism in the villas in Viareggio