The territory of Stazzema 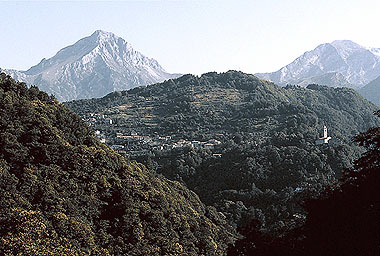 Surrounded by the Apuan Alps, Stazzema is in a panoramic position allowing us to admire the many scattered villages on the mountain slopes, that were inhabited since remote antiquity as the discovery of Apuan Ligurian tombs proves. The commune's territory was renowned for its rich silver mines, that undoubtedly in the course of time acted as stimulus for the preparation of a well organised defensive system. Torre dell'Argentiera, Monte Rocca, Castellaccio di Gallena and Torre di Monte Anchiana are the most interesting places, from a strategic point of view, on the part of Stazzema's territory connected to the ancient silver mines of S. Anna. Here we find chiselled galleries: medieval, Medicean or more ancient still.
Other castles or fortified places on the commune's territory are Farnocchia and Pomezzana, along with the towers built during the Second World War to control the Gothic Line.

The tower of Argentiera - S. Anna di Stazzema, in a wonderful position, is sadly famous for the massacre of its population during World War II, today remembered by a museum. To reach the Tower dell'Argentiera you have to take the road that mounts from the village square towards the ossuary; in the final section it becomes a dirt road, practicable only on foot. Continuing on the left at the junction with the private road leading to the silver mine, we enter a wood where no signposts for the remains of the tower can be found. A visit together with people who know the area is therefore recommended. Little known and unexplored by archaeologists, the tower is contained within a pentagonal boat-shaped enclosure, 6 x 12 m.. Its hilltop position not far from the Galleria dell' Acqua and the Galleria della Fontana, suggest that it served to protect the mines. Like the tower, also the several hundred metre deep galleries are now on private ground and have been explored only in part.
The tower of Monte Anchina - Other towers, the history of which is all but unknown, are scattered on the commune's territory. The Monte Anchina tower has been excavated and possesses an enclosure similar in shape and age, though larger, to that of the Torre dell' Argentiera. Inside medieval potsherds, nails, a stone cistern and bits of glass have been found.
The Castellaccio di Gallena Tower - The tower lies in an inaccessible area between Case di Monte Ornato and the summit of Mount Costa (Seravezza). It used to guard the upper part of the Gallena territory and presents a fortified pentagonal enclosure of the same size as that of Torre dell' Argentiera. Close to it ancient graves and thick walls with 'cupels' were found.
From Torre dell' Argentiera we can admire the ridge of Mount Rocca between S. Anna di Stazzema and Gallena-Farnocchia where, in a place now called 'la rocca', there used to be a fortification almost certainly to guard the territory and the nearby lead and silver mines.
Castle of Farnocchia - Farnocchia is an ancient village in Upper Versilia. The rests of walls, tombs containing urns, amphorae and terracotta vessels found in front of the parish church during works carried out in 1973, seem somehow connected with the remains of the ancient Castello dei Guinigi, demolished between 1678 and 1706 after the ancient tower had been struck by lightning and seriously damaged.
Apparently the whole upper part of the village was enclosed by fortified walls.
Pomezzana - This is a marvellous village surrounded by woods in the commune of Stazzema. The place-name "La Castellina", referred to the summit of the hill where the village lies and from where we have a vast, strategically significant, panorama, is the only element that recalls the presence of fortifications in the area.