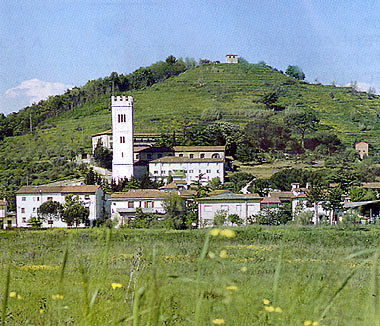 Porcari is a small commune, autonomous since 1913, after centuries of dependence from nearby Capannori. Since the 1960's its economy is based on industry, in particular paper mills, that attract businessmen and skilled labour from Italy and abroad. The modern town, built around the church of S. Giusto with its white marble façade, does not live of tourism although its territory preserves traces of a very ancient past, as Bronze Age finds in the Fossa Nera area and the discovery of an Etruscan, and later Roman, settlement near the lake of Sesto, prove. The town's history continues in the Middle Ages when it became an important bulwark in the defence of Lucca: the castle, of which very little remains, was built in this period.

Nothing remains of the castle except heaps of rubble from the ancient wall.

For centuries the area around Porcari was a bulwark in the defence of Lucca. The via francigena crossed the lower part of Porcari Hill and the first settlement developed around it. Between the Xth and XIIth centuries a castrum, mentioned in a parchment of 1039, was built on Monte San Giusto to control this main road connecting Rome to Northern Europe. The castle, seat of the powerful Porcaresi family, became of great importance during Lucca's wars with Pisa and Florence. It received a garrison and was renovated when Castruccio Castracani became governor of Lucca in 1316: together with other castles overlooking the Val di Nievole, it then served to counter the advance of the Florentines. During Paolo Guinigi's government, a time of peace permitted to put the fortresses , back into working order for the case of new territorial struggles. The defensive walls of the castle of Porcari and, at the same time, of the rocca di Montecarlo were reinforced. When strategic considerations gradually lost importance, in the course of the XVth century, Porcari became a marginal area in the territory of Lucca. We know of the existence of the castle until the XVth century; it was then progressively abandoned, as the Republic lost interest in keeping fortifications that had, by then, become completely obsolete. In its place a watchtower, that no longer exists, was built.