The tower of Salto della Cervia 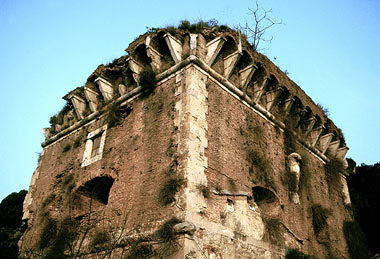 The territory of Versilia lies within the Municipality of Pietrasanta between the Apuan Alps and the coast. This small town developed along the ancient Roman Aurelia road and in the Middle Ages was at the centre of fierce territorial conflicts between Lucca and the many feudal lords who defended their hilltop castles; later it was also contended by Pisa and by Florence, willing as they were to expand their trade to the sea.
Torre del Salto della Cervia near Pietrasanta, just a few meters from today's state route and railway, was precisely one of the fortresses the Florentine government used to defend this coastal area in the XVIth century.

In a state of abandon, it badly needs to be reinforced and restored.

The strategically important territory between Pietrasanta and Montignoso had a fortress controlling the Via Francigena since the XIth century. This area was under constant pressure from Genova on one side, Florence and Lucca on the other, while pirates attacked from the sea. At the end of the XVth century, after the war with Sarzana, the Florentines occupied Pietrasanta and Central Versilia; the new government began a policy of economic and military changes. In order to protect the coast Grand Duke Cosimo dei Medici began the construction of the Salto della Cervia tower in 1568.
The area where the tower stands, fortified since the year 1000, was probably used to control the region around the lake of Porta Beltrame; it has an unusual position compared with fortifications defending the inland regions from attacks coming from the sea, usually situated along the coast or near the mouth of a river.
The construction of the fort was continued by the Grand Duke's son Francesco I and completed by Ferdinando Ist in 1588, twenty years after it had begun.