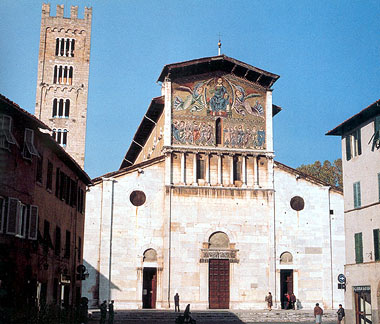 The basilica of San Frediano lies in the northern part of Lucca between via Fillungo, the main road axis, and the walls; after the Duomo it is the largest Lucchese church complex. The interior is divided into three aisles with a roof supported by visible trusses; on the sides are a number of chapels belonging to the gentry. Along the north side of the church is a large building that was until 1780 the convent of the Canonici Lateranensi. The basilica has a wide façade in white limestone and a large mosaic at the top. In the apse end of the church is a massive bell tower crowned by dovetail merlons.

The church was founded, according to tradition, by Irish bishop of Lucca Frediano and played an important role in the Middle Ages: beginning with the second half of the XIth century it was one of the most important centres of diffusion of the reformed Gregorian liturgy and the friars here became the spiritual leaders of several Roman and Italian communities.
In the mid XIIIth century the building was raised more than three metres considerably changing its whole proportions. In the course of the XVth and XVIth centuries the side aisles were covered with vaults. The side chapels were completed at the beginning of the XVIth century when the Micheli chapels and the 'cappella del Soccorso' were built. In 1506 the prior of the convent, Pasquino Cenami, had the ancient 'capella della Croce' restored dedicating it to Sant' Agostino: the frescoes in the chapel are by Amico Aspertini. In 1858 great part of the bell tower's masonry was renewed together with the merlons.
Inside the church you can see works by Jacopo della Quercia in the Trenta chapel as well as the tomb of Pasquino Cenami by Matteo Civitali, a XIVth century stoup and the altar of the Gentili chapel.
The church of San Frediano in Lucca is mentioned for the first time together with its monastery in a document dated 685.