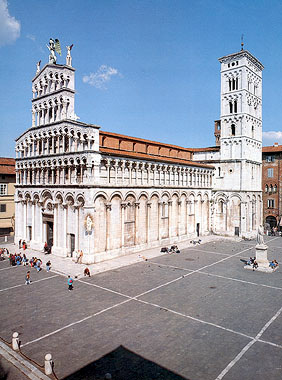 The church of San Michele in Foro of Lucca is ideally as well as physically in the heart of the ancient Roman town. It is a basilica with three aisles, transept and semicircular apse; the nave is supported by arches resting upon monolithic pillars and the whole building is covered by barrel vaults with lunettes. The bell tower is above the southern transept. The outside of the church is distinguished by a high ribbed and richly sculpted façade; the walls are mainly of perfectly squared limestone blocks.

The church of San Michele in Foro of Lucca is mentioned for the first time in 795; however, the present day building goes back to Pope Alessandro IInd. The four small loggias on the façade are the result of a later plan to raise the building proposed in the first half of the XIIth century by the masons working on the façade of the cathedral of San Martino. The bell tower, placed upon the southern transept, dates back to the XIII-XIVth centuries. In 1358 the roof was rebuilt and at the end of that same century the building was enlarged. In the time of communes the church played an important political role: indeed, until 1370 it was here that the most important lawmaking body in Lucca, the so called 'Consiglio Maggiore' presided by the 'podestà', met. When the church passed under the patronage of the Gigli family, beginning in the XVIth century, a series of renovations, among them that of the altars, were carried out and new windows were opened. In 1866 the architect Giuseppe Pardini restored the church and introduced quite a few new elements to the façade.
Inside the church you can see a glazed terracotta panel by Andrea della Robbia (1435-1525) representing a Madonna col bambino and a painting by Filippino Lippi (1457-1504)showing the Quattro santi.