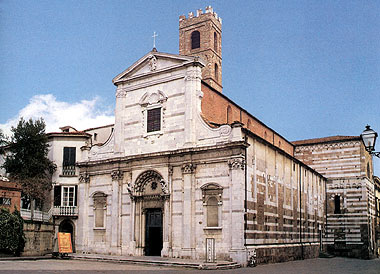 The church of SS. Giovanni and Reparata of Lucca is in the southern part of the ancient Roman town. It is a basilica with three aisles and a transept, covered by a wooden ceiling. Large part of the interior is covered with plaster and painted to imitate stone. The façade is in white limestone, while the rest of the building consists mainly of sandstone or brickwork. The transept, almost entirely made of bricks, communicates directly with the large baptistery; the latter has a square plan. The area occupied by church and baptistery has been recently object of an excavation campaign that has brought to light remains of early Christian buildings, the site can now be visited.

The church of SS. Giovanni and Reparata was formerly the cathedral of Lucca. The Romanesque construction was built in successive phases during the second half of the 12th century in an area that was densely populated since ancient times. The three aisles are divided by columns with composite capitals, many of which are simply reused Roman capitals. The bell tower, with brick and stone masonry, is placed at the junction between transept and aisles. At the end of the 14th century the baptistery was covered with a groined dome. However the most important changes to the building were made in the 16th century when the narrow Medieval windows were replaced by Modern ones, the façade was raised and a lacunar ceiling was added. The late 17th century Baroque chapel dedicated to Sant'Ignazio is on the north side of the building. Between 1840 and 1870 the church became a local mausoleum: tombs of important personalities and memorial stones were placed here. The church of SS. Giovanni and Reparata is mentioned for the first time in 754 in the testament of bishop Valprando.