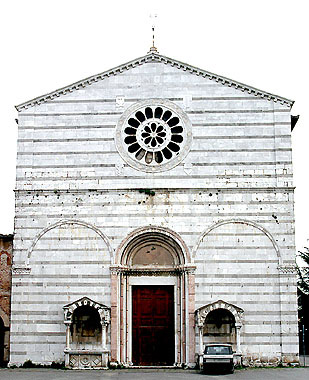 The Lucchese church of San Francesco is in the east side of the town outside the XIIth century walls. The very simple building consists of a vast hall with brick walls; the roof, supported by trusses, ends with three chapels that have groined vaults. The entrance on the façade is a large portal with above it a lunette and a rose window. In the late Middle Ages the structure of the church remained basically unchanged: only some cloisters and small chapels were added.

The Conventual Complex of San Francesco has been entirely restored thanks to funding from the Cassa di Risparmio di Lucca Foundation, with a view to a wider redevelopment and recovery project of some of the most important monumental areas of the city. The Convent of San Francesco today houses the headquarters of the IMT Alti Studi Lucca University Campus, adding to the Library and administrative offices already built in the nearby San Ponziano complex.

The presence of Grey Friars in Lucca, in the area outside the walls, is documented as early as 1228. In the beginning they occupied the church of Santa Maria Maddalena, but soon restoration works and the construction of a new complex began. Soon, around the church and monastery, a conventual centre developed with the oratory of San Franceschetto (1309), three cloisters and some other minor buildings. The façade of the church is constructed with the large white and grey limestone ashlars arranged in parallel horizontal rows. The decoration of the church is quite simple, a characteristic of all conventual churches, with just a row of ornaments in the apse that were originally occupied by terracotta bowls. In the course of the XIVth and XVth centuries new presbyterial chapels were constructed according, so the saying goes, to the wishes of Paolo Guinigi, lord of Lucca. After the suppression of monastic orders in the Napoleonic period, the church was given back to the Grey Friars; in 1844 the building was restored, only to pass once again into public hands in 1868, when it was turned into a military depot. In 1902 the church was redeemed by the municipality of Lucca and returned to be a place of worship. The limestone coating of the upper part of the façade was completed in 1930.
Inside the church you can see XVth century frescoes of Florentine school. On the sides of the main entrance are the sarcophagi of the Ricciardi and the Guidiccioni monument by V. Civitali.