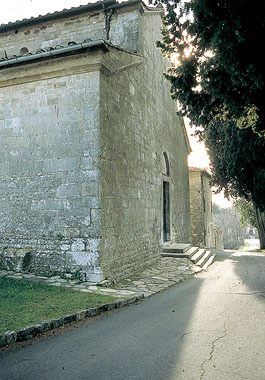 The pieve of San Giovanni di Monsagrati stands isolated from the village in a dominant position overlooking Val Freddana. Its architecture is simple and linear, almost without decoration and has preserved in its original form. The building has a Latin cross plan with three aisles and a semicircular apse; there are several entrances on the sides and a portal on the façade. The orientation of the church is emphasises by the apse that looks towards the valley and is richly decorated.

A church dedicated to Santa Reparata is mentioned as early as the Lombard period; in 989 it assumed the double title of Santa Reparata and San Giovanni. According to written sources the pieve was rebuilt on Colle Cerreto, where it stands today, in 1102, while the previous building was abandoned. The bell tower that stands isolated on the north side of the church was built in the same period.
The tabernacle, still preserved today, is 15th century; at that time the first repairs were made to the church by Benedetto Nobili. Later, between the XVIIth and XVIIIth century, the whole building was slightly raised in order to insert vaults and open large windows along the nave according to the precepts of the Counter-Reformation. Lastly, two clocks were placed on the bell tower and the latter was crowned with merlons. According to written sources the parish church of San Giovanni was probably rebuilt where it stands today in 1102.