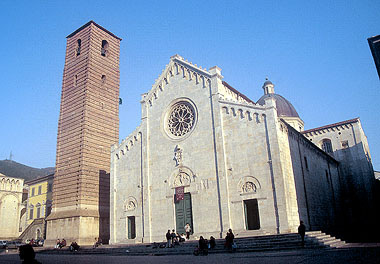 The church of San Martino is the cathedral of Pietrasanta; it faces the long square in front of the monumental church and convent of Sant'Agostino. Built immediately after the foundation of Pietrasanta by the Lucchese in 1255, the cathedral preserves in large part its XIVth century Gothic outline; inside are precious XVth and XVIth century sculpted decorations, in particular works of Lorenzo and Stagio Stagi.

The oldest part of the cathedral of Pietrasanta is along the north side and in the left transept, probably remains of the church built around the middle of the XIIIth century. At that time the church had a Latin cross plan, with three aisles, a transept and a semicircular apse. At the beginning of the XIVth century, in Castruccio Castracani's time, the church was entirely rebuilt. The inscription on the architrave of the side portal permits us to date the construction of the facade, the south side and the transept to 1330. It is unclear where the bell tower stood in this period since nothing has remained of it. The present day building can be basically dated to the 15th-16thcentury: in 1453 the first octagonal dome at the junction between nave and transept was completed. In the first decades of the seventeenth century important works were made on the dome : on this occasion the windows on the southern side were replaced with larger quadrangular openings. Finally, in the XIXth century two side chapels were added. A church dedicated to San Martino is registered in the cadastral survey of 1260 under the ecclesiastical jurisdiction of the parish of SS. Giovanni and Felicita.