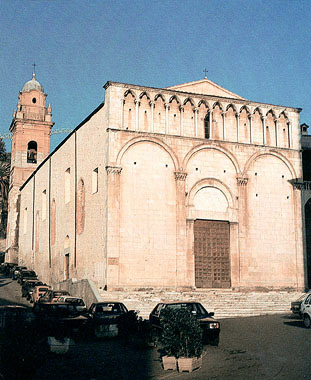 The church of Sant' Agostino, one of the main Gothic buildings on the territory of Lucca, dominates the main square of Pietrasanta from the height of its steps. The architecture of the façade is very characteristic with its round arches and small loggia.
The church has an unusual orientation complying with the layout of the square whose northern edge it forms.

The church of Sant' Agostino was built by the Augustinian friars with the financial aid of Lucchese merchants around the middle of the XIVth century, at the height of Pietrasanta's fortune when the town was indeed the economic capital of Versilia. The building has preserved entirely its XIVth century structure with the exception of minor changes. The church has only one aisle, its roof is supported by trusses; the nave is closed by a rectangular apse and today the only entrance is through a portal with a lunette above. On the sides there was a door with a round arch and three large brick bifore that were closed, probably in the XVIth century and replaced by four new quadrangular windows. The bell tower was built in 1780. The complex of Sant'Agostino is noteworthy for its dimensions and includes also a cloister and the homonymous convent to the east of the church, closed by Napoleon at the beginning of the XIXth century.