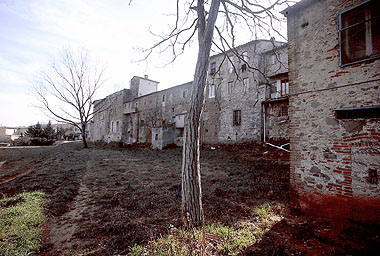 Famous for its "medieval hospitale" and for the chivalric order that derived from it, Altopascio develops north of the marshes of Bientina, near the small lake of Sibolla, marking the border of the Lucca plain with the Valdievole. It is a small village that preserves precious traces of its long history, first as a welfare center for pilgrims who passed along the Via Francigena, then as a fortified village with the aim of curbing the Florentine advance towards Lucca and finally as a Medici farm in the long period of belonging to the Florentine government. Although over time houses have been huddled, an imposing stretch of the ancient castle walls of Altopascio is visible on the north side of the village, where you can still observe the original crossbow slits. The four access gates - the Pesciatina, or gate of the mill (now the Mariani gate), the Fiorentina, or the tavern door (now the Vectors gate), the Padule gate and the Garden gate re-propose the Renaissance layout of the village. The ancient church, the cloister of the Hospitallers, the Palace and the towers document the historical stratification of the village.

A large portion of the castle walls can be seen.

In the Middle Ages the town of Altopascio was a centre of assistance along the Via Francigena where pilgrims passed on their way to visit the Volto Santo in Lucca, or directed further afield towards Rome and Jerusalem. Erected around the middle of the XIth century, its Hospital became a place where pilgrims, pregnant women, abandoned children and sick people were received and sheltered. In the XIIIth century its position bordering on the Valdinievole turned Altopascio into a castle with walls, gates and towers. Its decline began in the XIVth century and continued in the following, when Altopascio lost its strategic importance owing to the Florentine occupation of the fortress of Montecarlo.
In the XVth century, the Hospital was transformed by the Florentine Capponi family: the need for new spaces lead to the demolition of many buildings. The cloister was cut by half to make place for a court and the Porta del Giardino was opened. In the following century the Hospital passed under the control of Duke Cosimo I of the Medici family and the direction of Ugolino Grifoni, its master for the next 40 years. It continued in its work of assistance when the Lorena family succeeded the Medici, until Pietro Leopoldo Ist closed the Hospital in 1773.
The first known plan of the walls of Altopascio dates back to the XVIIth century showing a typical Renaissance layout: we lack information on the previous arrangement of the town's fortifications.