The territory of Capannori 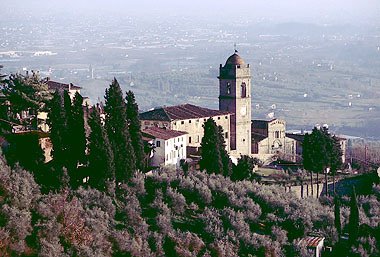 The territory of Capannori ranges from the Pizzorne upland to the Monti Pisani and the plain left by the drainage of lake Bientina. The heights around the main town are covered with scattered fortifications, castles and medieval towers that alternate with Renaissance villas of exquisite, refined design. The fortified places were built at a height that allowed for the cultivation of vines and olives, so they were not only military garrisons, but also villages where agriculture was practised.
Many of Capannori's castles are mentioned in the Chronicles, a manuscript written by the fifteenth century historian Giovanni Sercambi. Among the castles needing repair in order to check Pisa's advance towards Lucca, the historian mentions Pieve di Compito, the fortresses of Sant' Andrea, San Giusto, Vorno and Guamo, as well as the castle of Montecarlo, while among those destroyed by Uguccione della Faggiola, captain of the Pisans, he mentions the castles of Compito, Vorno, Castelvecchio and Nozzano.

Monte Castellaccio
Vorno is a beautiful village among hills that are an appropriate setting for majestic villas and wonderful stone farmhouses, surrounded by vineyards and shady pergolas. In the mountains on its territory we find precious traces of old castles that Lucca needed to defend itself from Pisan and Florentine aggressions. It is difficult to describe separately the history of Monte Castellaccio, A Castello and Monte Zano where we find remains of a compact system of fortifications.
The castle at Monte Castellaccio used to control the two roads leading to Pisa. Today its remains at the top of the hill cannot be seen because of the dense vegetation. It is mentioned since the middle of the XIIth century although we don't know to whom it originally belonged.
Similarly, we cannot draw a plan of the site called A Castello because of the dense vegetation. It used to control the road to Santallago, an ancient route towards Pisa.
Higher up are the remains of the castle called Monte Zano. The site is naturally fortified, on top of a steep slope and permits a wide view controlling the pass of Monte Croce Vornese.
The 'Compitese'
The hilly 'Compitese' area is covered with the scattered ruins of castles, sometimes difficult to reach and interpret on account of the shrubs covering them.
On the Col dei Lecci, behind the village of Compito, some rests of walls and a heap of rubble, probably belonging to a tower, are all that remains of the ancient castle. It's position consented the control both of the Pieve di Compito area and of the no longer existing lake of Sesto. Pieve di Compito also had fortifications, on a hill north east of the village, now called Monte Castellaccio. These were probably destroyed in the XIVth century and the remains are nothing but crumbling walls and heaps of broken slate that suggest the existence of dwellings or warehouses in the past. Only in 1994 a superficial exploration of the site, relentlessly covered by the vegetation, was made possible thanks to a fire.
Castelvecchio di Compito is in panoramic position on one of the ridges descending from Mount Serra. The place was of great strategic importance, permitting an easy control over the lake of Sesto, important junction in the territory of Lucca, while, at the same time, its altitude protected it from the unhealthy influence of the marshy waters. In the Memories of Giovanni Sercambi Castelvecchio is described as a fortress whose garrison had to defend Lucca from an eventual Pisan invasion. Some other documents also mention the castle, but today it is difficult to estimate its exact dimensions. In the 1980's the faces of many original stone walls were unfortunately covered with plaster as the houses were renovated. On the contrary we can still notice a portion of the ancient wall, maybe from the castle's donjon, next to the church.
S. Andrea di Compito
Lucca needed the fort of S. Andrea di Compito, famous for its gorgeous estates, open to visitors during the Camellia Fair, to oppose Pisan attacks. In XIVth century documents mention a 'fortress di Santo Andrea' that had to be supplied with arms, ammunition and food to resist the Pisans. Now we can still see here a well preserved signalling tower. It has a pavilion roof without crenels or corbels where the iron basket used for fire and smoke signals can still be seen. Wooden parts, like stairs and balconies, have instead been lost.
Castellaccio or Col di Pozzo a Matraia
Straddling the Fraga valley, the castle controlled the road between Garfagnana and the Serchio valley. Matraia is in a panoramic position overlooking the plain of Lucca. The ruins of the castle, with a portion of walls, the base of a tower and the remains of living quarters, can be easily reached since the church is now a sanctuary visited by pilgrims. It had two concentric circles of walls, the outer one in 'filaretto' filled with dry masonry. The castle was destroyed in 1327 by Castruccio Castracani.
Castellaccio of Segromigno Monte
The village is gathered around the XIIth century Romanesque church, at the foot of the hill called Castellaccio, where we can see poor rests of the homonymous medieval castle. The setting of the whole territory is exceptional and it is covered with magnificent villas that once belonged to Lucca's gentry.
S. Gennaro
This is a rather large village in a panoramic position overlooking the Collodi valley. In the Middle Ages it was a suitable place to a build a castle, of which, unfortunately, nothing remains. Its moderate altitude, just above 250 m. a.s.l., consented the growing of vines and olive-trees that supported the community. The castle, owned by the lords of Porcari, was probably destroyed at the beginning of the XIIIth century, though the ancient chronicles don't agree on the description of the events. Giovanni Sercambi blames it on the refusal of the lords to swear loyalty to the government of Lucca, whereas Tommasi thinks that the castles of Porcari, Gragnano and San Gennaro were destroyed by a popular uprising against the citizens of Porcari, who had killed the podestà sent by Lucca.