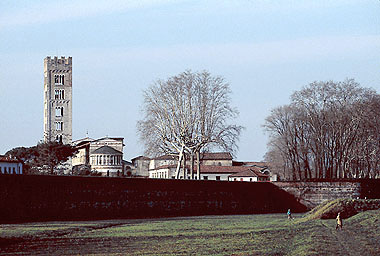 Lucca's medieval and Renaissance features are enclosed in its thick 16thcentury walls, a characteristic of this beautiful Tuscan town on the left of the river Serchio.
The circle of walls has eleven bastions of different shapes and dimensions. Both the so called Torrione del Bastardo and the San Martino bastion have preserved their original XVIth century structure. In particular inside the latter, open to visitors, we can examine in detail of one of these impressive constructions and see how the gunports used to be arranged. The San Paolino bastion, completely restored and open to visitors, proposes an unusual and winning solution for the reclamation and usage of large underground spaces.
The town was a free commune since the XIIth century and Porta San Pietro, the oldest (1565-1566) of its three original gates, was the only one through which foreigners were allowed to pass. Though in part modified in the course of the centuries, it still preserves substantially unchanged the look of its elegant facade. Inside Porta Santa Maria (1592-1594), open to the public and seat of the town's Newspaper Library, we can see the large scale mechanism that served to lift the heavy portcullis blocking the entrance below, the only original mechanism surviving in town. Porta San Donato Nuova (1628-1639) is an unusual example of town gate. Slender and refined in shape it has an elegant two colour decoration together with marble statues of San Paolino and San Donato. To the above mentioned we must add Porta Vecchia San Donato (1590), open to the public and seat of the Tourist Office, with the nearby remains of an old bastion which was part of an abandoned fortification project still based on the medieval wall. The circle of walls is completed by two modern gates, Porta Elisa and Porta Vittorio Emanuele.

Originally Etruscan and then Roman colony, in the Early Middle Ages Lucca was seat of a Lombard duchy and later capital of the March of Tuscany. Its true expansion took place in the course of the XIIth century when the town became a free commune. A thriving trade centre, Lucca gained increasing control over the Plain and Versilia, fighting against mighty feudal lords, conquering their castles and successfully defending the new territories against Pisa. The Roman walls were replaced by a new circle of walls, finished by 1260: a fortress with a number of towers semicircular, four gates with drawbridge and a moat surrounding the town entirely. Under Castruccio Castracani Lucca engaged in a series of wars culminating with the capture of Pistoia and the expansion as far north as Pontremoli in upper Lunigiana. Castracani's sudden death marked the beginning of an unfortunate period for the town, taken by the Pisans in 1342 and finally liberated by Emperor Charles IVth of Bohemia only in 1369. At the beginning of the XVth century Lucca enjoyed a period of peace and prosperity under Paolo Guinigi. At his fall in 1430 the Republican regime was restored, to last until 1799. In 1805 the Principate of Lucca was established, became then a Duchy under Maria Luisa di Borbone, from 1817 to 1824 and was finally incorporated in the Grand Duchy of Tuscany.