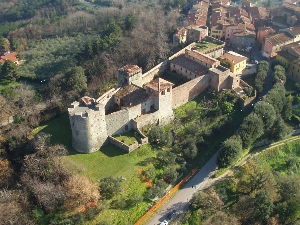 Just over 150 m a.s.l., on the Cerruglio hill, Montecarlo overlooks Valdinievole on one side and the Piana di Lucca on the other. In this area, today covered with vineyards, the fate of Lucca and Mons. Carolis himself was decided at the turn of the XIVth century.
Aristocratic Montecarlo is dominated by a fortress culminating in the triangular rocca at the top of the hill and its central donjon.

The fortress ended in 1775 its military function and was abandoned and sold to privates. Important restoration works were realized by the current owners: the “ Maschio” (donjon) and the “Torre dell'Apparizione” (Tower of the apparition), which are part of the 14th century three-towered Rocca del Cerruglio, and the Fortezza Medicea (Fortress of the Medici). The exhibition halls, also recently restored, host exhibitions and cultural and wine-gastronomic events.

Since the Xth century the hill of Montecarlo was home to one of the many feudal families that controlled the territories of the Plain and of Versilia. In the 14th century Castruccio Castracani, ruler of Lucca, reinforced the existing fortified structure with the intention of installing his headquarters in the new rocca. The intervention of Charles of Bohemia, sent by his father king John to support Lucca against Pisa first and Florence later, had its consequences on the future of Montecarlo. In 1332 when the Florentines destroyed the neighbouring village of Vivinaia and its inhabitants took shelter on the hill at the foot of the Cerruglio fortress, Charles ordered to build a new fortification on the site. Considering its strategic position the prince of Bohemia didn't hesitate to build a proper castle enclosing the whole village within its walls and called it Montecarlo in his memory. After being controlled by Paolo Guinigi of Lucca at the beginning of 15thcentury, Montecarlo passed under the Florentines and with the accession of the Medici the fortress was modified in its structure. Dismantled in the eighteenth century according to the wishes of the Lorena dynasty, in time the fortress passed into private hands.