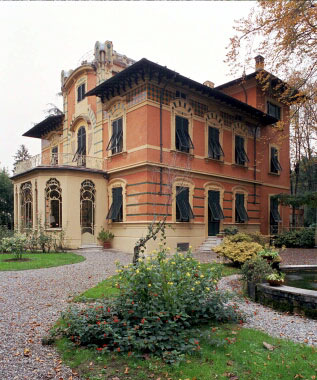 With the arrival of 1870 the Town Council becomes the owner of the walls of Lucca and urban plans are immediately put underway to systemize the bastions and the surroundings as well as the opening of new doors. During the first years of the 1900's the ring road is practically finished and the ring is completed with avenues which run from the city of Lucca in the directions of Viareggio, Pisa, Pescia and the Garfagnana. On the ring road and along these four main routes, building construction takes place from the end of the 1800's to the beginning of the first World War using an allotment programme which mainly interested the rich middle class who had made their fortune directly or indirectly due to the emigration phenomena, which particularly favoured moves towards the U.S.A., a consistently evident factor in Lucca since the 1880's. This middle class is made up of rich traders, food industrialists, bankers and money dealers, who, thanks to immigration patterns, manage to make their businesses prosper.
The chosen type of architecture for these residences and often for factories, shops, offices etc. too, is that of the little villa and town house, differing from the Lucchese country villas given that they are permanent residences. The chosen architectural language is Modernism. It follows the main traits of 19th century architecture showing neoclassic divisions rather than the new Liberty line. The new style is applied mainly in floral patterns and found on the main façade with pictorial and ceramic decoration, balustrades and iron gates in typical animal, phytomorphic and coup de fouet depictions. It is rare to find a building that is entirely planned using the new style both in construction and decoration.
In order to have a panoramic vision of the vast majority of these buildings we can suggest an itinerary that follows the walls along the ring road and then, from here, departs along the three deviations towards the areas which, for the construction work carried out at the beginning of the 1900's, conserve a significant number of buildings worthy of interest: Sant'Anna on Viale Catalani and Puccini; San Concordio and San Marco on Via Civitali. A further itinerary of the historic centre must be advised even though it does not tie in with the themes discussed in these files. There you will find interesting Liberty style decoration on the façades of historical buildings, in particular on shop fronts which at the end of the 1800's go through an important renewal process linked to the new middle class society.
Centro Studi Cultura Eclettica Liberty e Dèco

District/Location: Lucca
Recommended season: All the seasons
Get directions