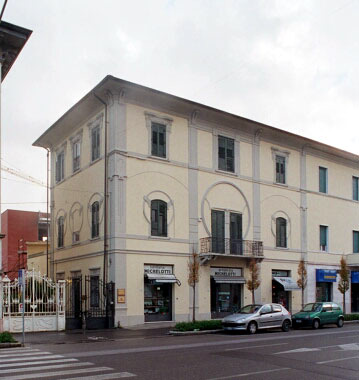 Via Catalani
Leaving behind the door of Vittorio Emanuele II which was opened in 1911, you take via Catalani in the direction of Viareggio where at number 24th, which is on the corner of viale lazzaro Papi, you will find a little corner villa built in 1915 and designed by the architect Lelio Menesini.
At numbers 100th, 116th and 122th you will find palazzo Maso and the ex Haulage Cooperative garage, built in 1912 and 1914 by the architect Giovan Lelio Menesini.
There are other noteworthy buildings at door numbers 81st, 87th and 167th which are traditional in structure but are decorated in the eclectic style. The little villa at number 135th is based on the classic cubic Tuscan model; at the back on via Gemignani there is a twin villa. The little villa at number 136th displays motifs of eclectic taste with a great profusion of decorative elements in cement. The main door is particularly original, decorated with ornamental motifs in the shape of garlands and palms and surmounted by a PB monogramme.
Finally, the Villa Martini at number 158th, dating back to 1912, was also built by the architect Giovan Lelio Menesini.
Viale Puccini
Still continuing towards Viareggio, you take viale Giacomo Puccini, where at number 75th you will see Villa Lazzeroni, built by the Orzali company at the beginning of the 20th century.
Edifices built during the first 20 years of the 1900's brighten up the avenue at number 143rd, 142nd, 156th, 170th, 251st and 254th, each one repeating traditional structures and decorations typical of the 1800's.
At number 400th there is a little villa which is very interesting for its external stairs which lead to an open gallery with ionic columns in grit surmounted by a terrace. The structure of this little villa is still tradition as is the decoration with the exception of the painted eaves fascia featuring motifs of peacocks.
The structure of the villa at number 453rd is also traditional but modernist taste is especially evident from the eaves fascia which are made of relief cement in order to form geometric and phytomorphic motifs. On the central part of the fascia there is a scroll bearing the year 1913.
To the immediate side of this building at number 467th, there rises a charming little villa adorned with an interesting eaves fascia featuring paintings and corbel in cement. Under the fascia there are three decorative frames in symbolist style alternating with the windows, that show two deer eating leaves off a tree at sunset.
The little villa at number 527th is also interesting and is embellished with a charming bow-window which is shape like a tower at the corners. the villa is adorned with an eaves fascia and decorative panels under it, both depicting motifs of chrysanthemums on a star-shaped light blue background of oriental taste.
At number 548th you will find Villa Martinelli today Caprotti, which was redesigned and extended at the beginning of the century by an engineer called Frediani. In its surroundings which were once linked to viale Puccini by way of a narrow path, you will find Villino Jole, designed for himself by an engineer called Arturo Caprotti in 1912. It presently looks on to via Paganini at number 76th.
Continuing along viale Puccini, you will find the little villa Cortopassi at number 588th/510th which is eclectic in style given the decoration which features elements in cement and an eaves frame with geometric motifs.
At number 643rd which has an irregular base there is a little villa characterised by an open gallery entrance which looks on to both viale Puccini and via Ferris. The little villa is especially noteworthy for the painted eaves fascia which is lowered above the windows forming a decorative lunette element which is embellished with flower vases in a style reminiscent of Klimt .
The little villas at numbers 712nd and 738th are both based on traditional styles. The latter is more characteristic due to its corner entrance and the open gallery surmounted by a terrace as well as the imitation stylised ashlar work adorning the ground floor and the decorative cement fascias depicting geometric motifs of plants volutes and flowers.
On the corner of via Don Sturzo you will find the nursery "Regina Margherita", a noteworthy building with a Greek Cross Plan. The wing running parallel to viale Puccini is emphasised at the corners using pilaster strips. The part overlooking the road rises in a turret and serves as the entrance which features two symmetrical doors bearing a memorial stone made of marble from Carrara in remembrance of those killed during the First World War. The memorial stone sits on a high socle and is surmounted by a divided tympanum and supported by corbels. Everything is realised in stone from Matraia. On top there is a niche in the shape of a triumphal arch which is decorated with swords and oak branches. The tower is crowned with the coat of arms of Lucca in stone which bears traces of chiselled lictorian fasces. On the wings parallel to the road there are two memorial stones bearing the names of the fallen. The nursery is presently the seat of the "Cultural Recreation centre for the Elderly".
Finally, attention must be drawn to the elegant Villa Chelini at number 1745th which was built in 1909.

District/Location: Lucca
Recommended season: All the seasons
Get directions 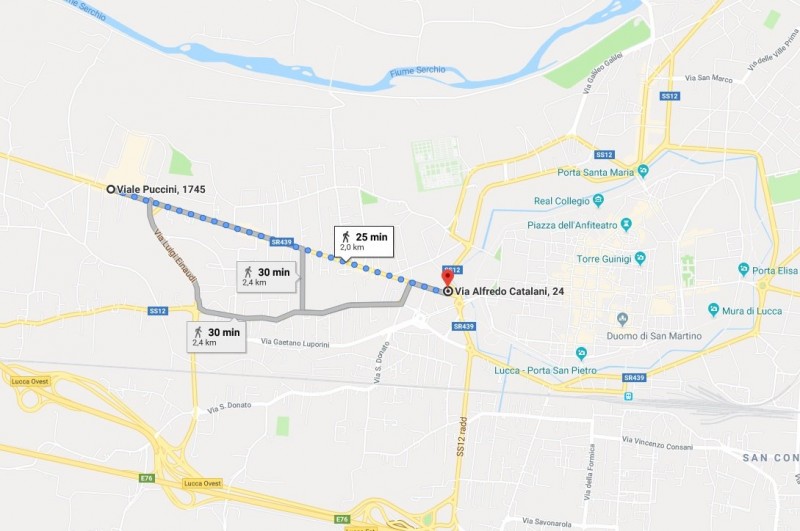