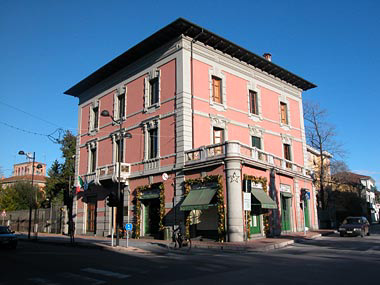 On viale S. Concordio near the level crossing you will find two buildings with a classic 19th century style. At number 64th there is Palazzo Andreoni, designed in 1902 by an engineer called Giuseppe Puccinelli and at number 81st you will find the neo renaissance villa which is presently the seat of Enel. Continuing along the street, you will come across Villa Lipparelli at number 118th which dates back to 1905 and Palazzo Ponzi at number 149th, dating back to 1909 and presently the seat of the "Institute Esedra". They are both of eclectic taste. The villa at number 135th is of the same cultural matrix, where by the characteristic traits of eclectisism are based on the traditional cubic structure. It presently hosts banks. Having passed the crossing at the parish church, there are other constructions dating back to the beginning of the 1900's. At number 190th there is Villa Francesconi, designed by the engineer Francesco Raggianti in 1901 and reminiscent of the neo renaissance style as is the villa at number 228th. At number 461st you will find a villa of eclectic taste which, on its classical planimetric structure, bears abounding decorative devices which characterises the terrace at the main door, the window frames, the painted eaves and the corbels supporting the wooden caisson cornice. The villa is presently the seat of the "Banca Nazionale del Lavoro". Shortly after, at number 563rd we come across another classic volumetric structured villa. It is worth noting the marble shell above the French window which opens onto the balcony and the rustic 16th century shaped pillars which alternate between painted and tufa strips flanking each side of the garden gate. At numbers 710th and 738th there are two twin villas that repeat the traditional structural components but in the decoration of their pilaster strips and window frames allow the emergence of pleasing stylised motifs which fall in line with modernist taste. The villa at number 710th appears to be raised by half a floor above the other more graceful one which still conserves its original proportions. The following villas at numbers 850th, 932nd, 993rd and 1066th also fall in line with traditional planimetric and distributive structures. The gardens surrounding two of the constructions at numbers 932nd and 993rd have unfortunately been sacrificed due to the presence of the motorway where at that particular point there is a fly over. As is evident from above, all of these edifices have adopted traditional planimetric and distributive structures without breaking with any elements employed during the last ten years of the 1800's. The same choice of tranquil solutions characterises the front views, which are usually based on the main door being positioned in the centre of the ground floor with lateral windows positioned symmetrically, a balcony with French windows positioned in accordance to the main door on the first floor and the same number of side windows in line with those below. The whole, rigorously symmetrical in form, is decisively organised in a vertical system by the pilaster strips which emphasise the corners of and often the frames of the windows too. The decorative elements, which evoke neoclassic and Tuscan renaissance architecture, are also decisively traditional: imitation ashlar on the ground floor, smooth plaster on the other floors, architraved windows or surmounted by tympanums, string course frames as well as the already mentioned pilaster strips. Lastly, attention has to be drawn to three villas in viale Concordia which, although they are not marked by innovative solutions, bear decorative characteristics which set them apart from the other villas in the street. At numbers 1100th and 1125th there are two villas which have been constructed without solutions of continuity adopting simple planivolumetric structures and pilaster strips ashlared in the corners. The villas are characterised by a refined cement cornice with ceramic vases that runs along the façade under the eaves fascia. Immediately afterwards at number 1130th there is a villa dominated by an external spiral stairway. Above it there is a columned portico which supports a terrace. Above the latter you can see a raised body that suggests the volume of a tympanum. The eaves are decorated with ceramics which form a checked motif. 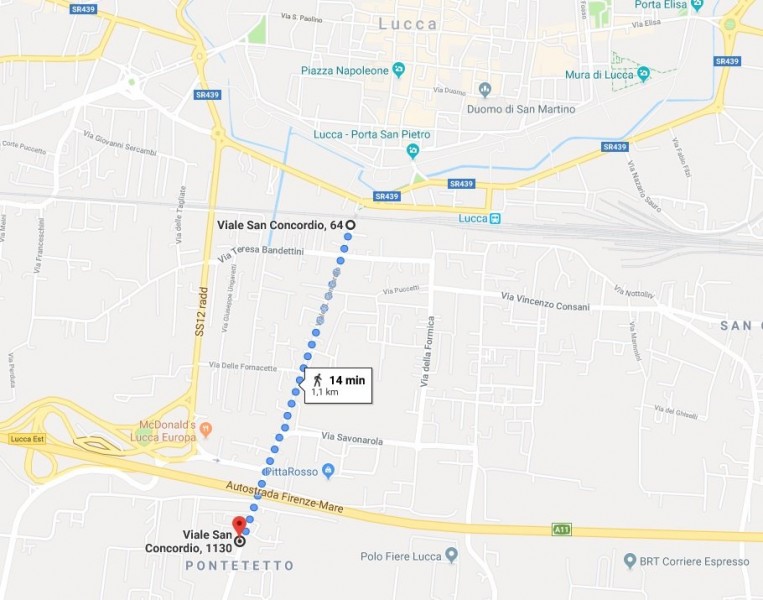