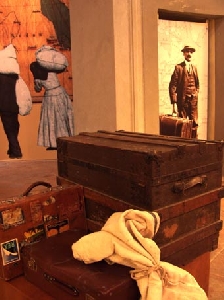 The Museum, that is in the Palazzo Ducale of Lucca, derives the name from the florentine photographer and collector Paolo Cresci. It preserves and shows an extraordinary and varied documentary material about the emigration in Italy from the Unity. Through letters handwritten, photographs, passports and others public and private documents it is possible to go along again the migratory experience in the most importants steps and the most recurrent vicissitudes: from the conditions of life of the people who decided to emigrate, to the preparations for the departure, to the arrival to the new world, to the search  for a work, to the life with the feet in the “Merica” and the hearth in Italy. Aims o f the museum and the archives, supported from the Paolo Cresci Foundation,  are the study and the divulgation of the history of the emigration suggesting  to our country, actually land not of emigration but of immigration, the civil values of the tolerance and the constructive values that rise from the interaction between different cultures.

Paolo Cresci (1943-1997), scientific photographer at the university of Florence, was also a keen collector of documents regarding the history of emigration. He started in the 1970s, and kept collecting material until he gathered a vast amount of documents including thousands of letters, pictures, passports, public and private files, books and magazines - the most important Italian archives for the history of emigration so far. When Cresci  died, the Provincial Council of Lucca decided to continue his work by creating the Foundation, named after him. The museum shows part of the material of the archives in various sections concerning all the stages of the emigration,  included the foundation of new cities, the forms of associations, giving prominence to the problems connected with the integration and the cohabitation. In the multimedia room you will have the chance to view historical footage, as well as old and modern film scenes dealing with the emigration phenomenon. Plus, you can enter a video position showing interviews to emigrants shot by the Foundation itself. By accessing the Archives database, you can even start your own historical search for people who emigrated.