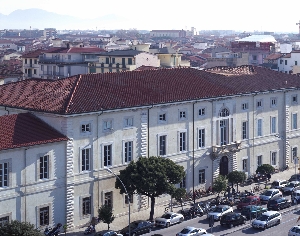 The Gallery of Modern and Contemporary Art Lorenzo Viani (GAMC), set up in the heart of the city, inside the historic Palazzo delle Muse, has a collection of over 3000 works by around 750 protagonists of 20th century art, including a substantial core of graphic works stands out. The museum also has the most important public collection of works by the expressionist artist Lorenzo Viani. The gallery spaces are divided into two areas, one dedicated to the permanent collection and one reserved for temporary exhibitions.

The permanent collection of GAMC consists largely of private donations. The first nucleus was established in 1979, with the purchase by the Municipality of the Varraud Santini Collection, made up of 50 works by Lorenzo Viani from Viareggio. This is followed by the Lucarelli Donation with 45 works by the most important Italian authors of the 20th century. The Donation of Vera and Giovanni Pieraccini, consisting of about 2000 works, completes the Collection and gives the definitive impulse for the establishment of the Gallery, inaugurated on April 5th, 2008. It is possible to admire paintings, graphics, sculptures by Italian and foreign authors, from the late 19th century to the present day, including Pisarro, Boldini, Signorini, Ensor, Soffici, Severini, Kirchner, Grosz, Carrà, Dix, Chagall, Léger, Guttuso, De Chirico, Casorati, De Pisis, Rosai, Archipenko , Arp, Corpora, Capogrossi, Vedova, Scanavino and many others. The Gallery also has a significant presence of local authors or who have had links of various nature with this land, including Moses Levy, Renato Santini, Mario Marcucci, Vinicio Berti, Alfredo catarsini, Galileo Chini, Enrico Baj, Corrado Cagli, Primo Conti, Emilio Greco, Mino Maccari. On the Gallery website (www.gamc.it) it is possible to view all the works in the collections.

• Modernism in the villas in Viareggio