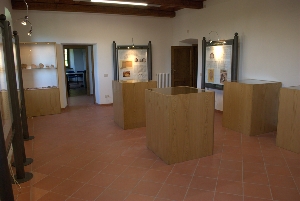 The Pelliccioni-Marazzini palace, jewel of the town of San Romano, is one of the most  significant example of local architecture. Characterized from a double row of typical roofs with arch, it has four levels and it is surrounded by gardens and threshing-floors.
At the ground floor you can visit the Esposizione Permanente dell’Archeologia del Territorio, inaugurated in 2005. The territorial museum was born to complete and to emphasize the information about the Fortezza delle Verrucole: in fact it preserves and shows archaeological finds that come from the digs made in the Fortezza together with the repairs. They are objects of the Middle Age, indicated together with explicative  panels. Other manufactured articles, found in the territory of the district, are of the Bronze Age and of the period of the Apuan Ligurians who settled down in Garfagnana around 300 b.C. Among the ligurian objects you can admire the fragments of ceramic from the Monte Pisone.

Archaeological finds from the Bronze Age to the Middle Age.

The museum consists in two sections, one with archaeological objects from the Fortezza delle Verrucole, the other with findings that date back to the Metals Age. In the first room you can see some findings of the middle of the Bronze Age (XVth century b.C.), of the Cultura delle terramare, found during the construction of the kindergarten of San Romano. Some other findings, coming from the hill of the Fortezza delle Verrucole, date back to the recent Bronze Age and the final Bronze Age. From another hill, the Monte Vigne, come the other fragments of pottery showed, that attest the important presence, in the IIIrd century b.C., of the Liguri in the territory.
The second room is dedicated to the Fortezza delle Verrucole, described in its evolution, beginning from the castle, attested by the historical sources, already in the 1207. The big military structure, that was constructed on the basalt of Verrucole, can be seen, in its extension, from the rooms of the museum. The archaeological materials accompany the historical events and the various architectural transformations of the building, mostly from the half of the XVth century, when the Estensi controlled the Garfagnana. The Estensi, infact, to consolidate their power, made the castle become a Fortezza, as attested by the rich documentation.