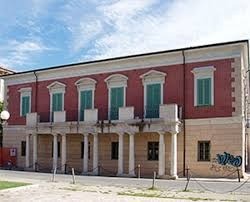 The architecture of the palace develops over two floors and stands out due to its powerful architectural volume which runs along the entire block on via Novembre IVth on the east side, via Paolina on the west, via dell'Olio on the north and via Machiavelli on the south, where the main façade of the building stands. In 1882, the music maestro Giovanni Pacini, on behalf of Princess Paolina, asked Maria Luisa, Duchess of Lucca, for " 220 squared braccia of deserted coastline on the outskirts of Viareggio on the north-west side of the city".
Giovanni Lazzarini, the architect of the Napoleonic princedom in Lucca, was responsible for the planning of the villa. To the first phase of the building's realisation (1822-1824) belongs the main cubic shaped body of the villa. When Paolina's sister, Carolina Murat, became its new owner another part was added to it, doubling its extent.
Vittorio Papanti, the owner of the building from 1858 to 1870, made other changes to the palace which completely renewed it. He closed off the loggia facing the garden and then raised the front of the building connecting the two wings, thus constituting a close-packed structure where only the atrium was left uncovered.
The palace, which was bought by the "Real Collegio" in Lucca , was transformed into a boarding school and then enlarged following the projects of the engineer Vincenzo Paoli.
Villa Paolina hosts the Civici Musei di Villa Paolina.

The construction of the villa in Viareggio is linked to a friendship between Princess Paolina and the musician Giovanni Pacini. The villa is built along the coast on the outskirts of the city. In 1822 the Princess was assigned allotments to erect a palace with gardens, as well as a stretch of beach in front where she could "construct an avenue so as to avoid obstructions to her view".
The building belongs to the Town Council and is at present being restored. It hosts the Archaeology museum "C. A. Blanc" and the "L. Viani" Art Gallery.