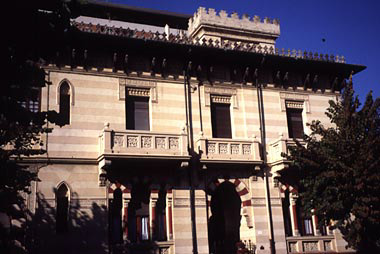 Realised in 1912 by Professor Enrico Nistri, the building constitutes the most accomplished and important example in the town of architecture inspired by strictly oriental themes. An angular tower, whose battlemented silhouette refers directly to the image of an Egyptian minaret, stands out against the rectangular based building of articulated volumetric composition. The façades, which are decorated with two coloured fascias featuring a rich repertoire of decorative and epigraphic motifs, declare a contamination with Islamic art. The façades are articulated to varying degrees and don't have a compositive hierarchy; double and single lancet windows with decorated intrados are alternated to the side of the entrance loggia. On the first floor the single lancet windows are alternated with rectangular windows which are decorated with arabesque motifs. The other façade is animated by the effect of the volumes which tend to accentuate its height with the tower which has triple lancet windows. The minute detail of the Islamic repertoires can be seen on the built-in panels, the moulding, the crowning decoration of the building, in the use of colours, on the wooden corbels which support the projecting parts, on the balconies, in the decorations on the surrounding wall, in the wrought iron and in the complex effect of the profiles and materials.
The villa is a private property and cannot be visited inside.

Enrico Nistri (Pisa 1871 - Viareggio 1922) settled in the villa with his wife and children, Umberto, Margherita Bianca and Matilde in 1913 where the youngest child Fernando was born in September of the same year. The figure of the artist, who was originally from Pisa, of whom up until now there had only been sparse and fragmentary information, represents an important page in the cultural and artistic panorama of the town.
Until 1900 Nistri was a teacher at the Reale scuola Tecnica in La Spezia. In 1901, together with his brother Giuseppe, he moved to Cairo where he created the Nistri Brothers decoration company. Just one year later, in 1902, he formed his own personal company which was among some of the most important in the decorating field in Egypt and he ran it until 1919.
In reality Nistri's story adds a small part to the important chapter of the presence of Tuscan artists, architects and craftsmen in Egypt. As a matter of fact, from the second half of the Nineteenth century, in the likelihood that eastern countries were close to rapid westernisation, many Tuscans moved to Egypt. A typical example of this is the figure of Nistri who managed to interpret and propose a rich repertoire of a decidedly Arab taste with his "entrepreneurial and artistic painting and decoration" business.
(source: Alessandra Belluomini Pucci - Centro Studi Cultura Eclettica Liberty e Déco)

District: Versilia
Building dating: 1912
District/Location: The villa is a private property and cannot be visited inside.
Get directions