Palazzo Bertolli, now seat of the Professional Institute for Tourism 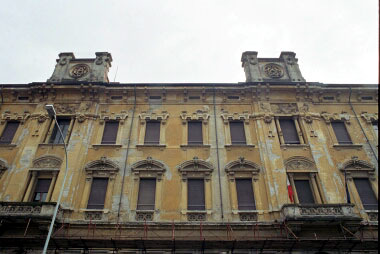 The rectangular based building consists of three floors above ground level in addition to the attic and is considerable in dimension. It has a pavilion roof surfaced with Marseillais tiling.
The internal distributive plan is very linear, even though internal modifications have been made, for which no council permission is documented, in order to use the entire premises as a school. Such modifications include the installation of a lift in the two entrance rooms. However, the internal staircase has remained the same and is made from granite with a wrought iron banister.
The main façade which faces north and looks onto viale Cavour is strongly marked by the presence of decorations clearly inspired by the Art Nouveau movement. The bas-reliefs in cement adorning the cornices of the windows on the upper floors are particularly interesting and are attributed to the Lucchese sculptor Gugliermo Petroni. The façade is characterised by two turrets towering above the roof that conclude the two fasces in which the doors are inserted. The latter are crowned with prominently projecting terraces.
The south facing façade which looks onto the railway line also boasts beautiful and careful workmanship.
The building is a private property and cannot be visited inside.

The palazzo was built between 1910 and 1912 on land owned by the company "Francesco Bertolli", a family of entrepreneurs in the oil production field. It was situated between the Fenili property on the east side and the area of property owned by the state railway to the south, while the building looked onto the road on the north facing side.
In the building construction area surrounding palazzo Bertolli there was another palazzo belonging to the family as well as palazzo Lazzareschi Lazzeroni which hosts the police headquarters. The three buildings together constitute the most representative realisations in the area situated immediately outside Porta S. Pietro.
From the original designs of Giuseppe Puccinelli's project, you can see that it consisted of two floors above ground level. The ground level was used as a storeroom for company activities while the first floor was divided into two apartments, each with a staircase and vast terrace.
During the 1950's, an extension was added on to the west side of the palazzo using reinforced-concrete, notably contrasting with the more ancient part. After the town council of Lucca bought the property for scholastic purposes, the extension has housed the gymnasiums of the "Instituto Pertini" since the 1970's.
(source: Lorenza Caprotti - Centro Studi Cultura Liberty e Déco)

District: Piana di Lucca
Building dating: 1910-12
District/Location: The building is a private property and cannot be visited inside.
Get directions