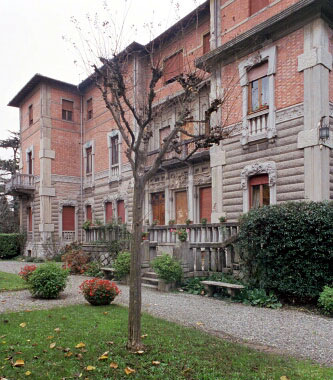 The reinforced concrete building is of considerable size and has an articulated rectangular base which stretches across three floors and a basement cellar. It has a hip roof which is covered by a layer of Marseillais tiles.
The facades feature a lot of decorative detail: imitation ashlar, facing brick and concrete features, which make the villa different from the other buildings appertaining to the same period which look onto Via Civitali.
The ground floor facades, with the exception of the east-facing one, have been treated with rounded ashlar-work which is characterised by distinct chiselling. The architraves appertaining to the windows are adorned with phytomorphic motifs and below some window sills there are some highly stylized floral motifs. On the main façade there is a main door and two openings which open onto a circular terrace to which access is gained by way of two lateral flights of stairs; finally a fascia featuring bas-relief illustrations decorates the upper part of these two openings.
The first floor is characterised by facing brick work, window decorations and parapets with small columns below the window sills. There are also three terraces with either concrete pillaring or wrought iron railings spaced with small columns.
On the second floor there is again facing brickwork and along the south, east and west-facing facades the villa is defined by a cement cornice which highlights the original flat roofing. The windows on this floor are framed with a simple concrete fascia.
The corners of the building are defined with plastered pilasters which are spaced with slightly projecting stone blocks.
The building is a private property and cannot be visited inside.

The villa was projected by Eng. Arturo Capotti in 1913.
Originally, the south-facing part had two floors above ground level which were covered with flat roofing, whereas on the north-facing part there was a third floor which was destined for the servants. In 1920 an apartment was build on top of the terrace and in 1943 a raising was constructed above the servants' apartment; in this second intervention the decorative features in concrete below the eaves and around the windows were demolished.
(source: by Lorenza Caprotti - Centro Studi Cultura Liberty e Déco)

District: Piana di Lucca
Building dating: 1913
District/Location: The building is a private property and cannot be visited inside.
Get directions