Oratory of the Guardian Angels 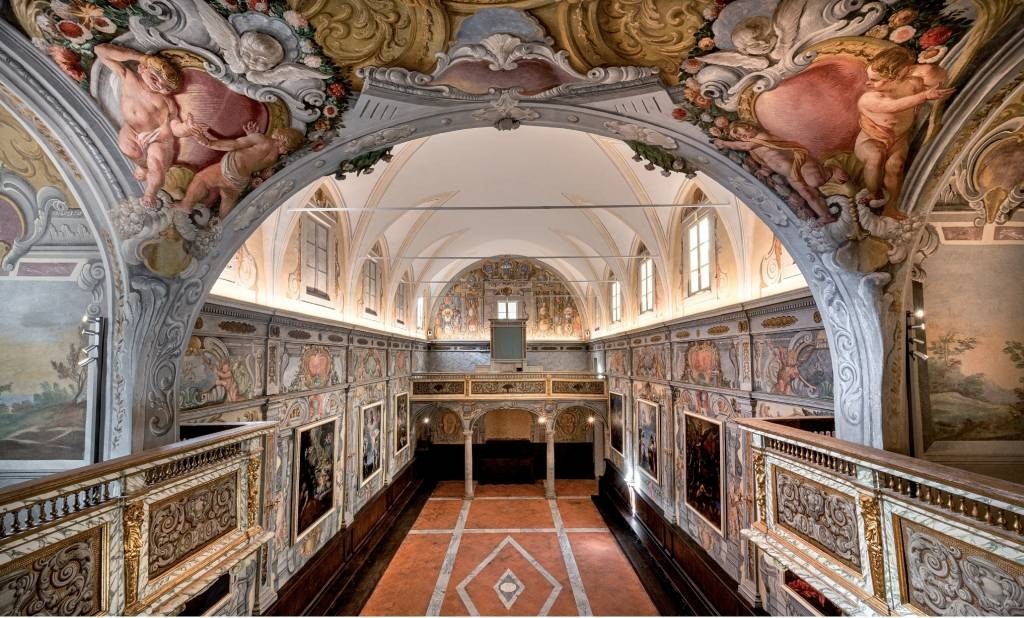 In the Angelo Custode street, in the historic center of Lucca, there is the homonymous Oratory, a small baroque jewel built in the mid-seventeenth century. The facade is quite sober and anonymous, but as soon as you cross the entrance you can admire the nine canvases that decorate the interior walls, painted by the masters of the 17th century in Lucca, among whom we can name Girolamo Scaglia, Filippo Mannucci and Antonio Franchi. The theme shown on the canvases is that of the presence of the Angels as God's intermediaries. An explosion of colors envelops the visitor thanks to the alternation of painted elements and material decorations. In fact, the author Giovan Domenico Lombardi wanted to propose an illusionistic game between real architecture and painted architecture. Whoever enters the Oratory of the Guardian Angels has a sensorial experience.

The Foundation, in collaboration with the consortium of tour guides TURISLUCCA, organizes free tours for participants, every Friday from 7.00 pm to 10.00 pm.
It is a series of events consisting of a guided tour and a short final musical moment, lasting a total of one hour, with time slots 19-20, 20-21 and 21-22.
The visits will be conducted by qualified tourist guides, while the final musical moment, lasting about 15 minutes, will always be performed by at least two young talents from Lucca who will alternate in the summer weeks.

To book, you will need to contact TURISLUCCA on 0583.342404 or write to turislucca@turislucca.com.

Reservations will close at 12.00 every Friday, in order to allow the organization of visits.

The Oratory of the Guardian Angels was built starting from 1638 with a project by Vincenzo Paoli, but the Congregation of the Guardian Angels was born earlier, in 1627. In this year Bonaventura Gasparini (1579-1659), a religious who dedicated his entire life to the poorest and the unfortunate people, he had the opportunity to live in a house granted to him by Carlo Guinigi. The house, which was located near the church of Saints Simon and Jude, then became the place where the Oratory was created thanks to the donations of Bonaventura. In fact, on the pedestal of the religious's bust it was written <<Bonaventura Gasparini Founder>> and after his death, in 1659, he was buried in front of the altar of the Oratory.

The visitor who enters the Oratory can notice, around him, an explosion of colors and harmony. In reality, the decorative project was conceived by the painter Giovan Domenico Lombardi (1682-1751), certainly after the death of Bonaventura, who would not have wanted this idea of ​​pomp. Lombardi, having a great culture of sixteenth century painting, especially referring to Titian, Tintoretto and Veronese, decided to propose clear and bright shades, which underline the majesty and enhance the details. The presbytery, framed by a small choir in carved and painted wood, shows a perspective game composed of staggered planes. In the center of the triumphal arch there is a wooden statue painted in imitation of marble and is kept in a niche where the Angel is unveiled by a pair of large angels, illusionistically reproduced by the painter. There is also no lack of cherubs holding a floral festoon and which are partially made of stucco. On the back wall of the oratory there is also the Madonna and Child who appears among the clouds. The typical techniques of the Baroque can be observed in various points of the religious building, for example in the phytomorphic figures (plant intertwining) or in the marble folders with shells and cornucopias.

Along the walls 9 canvases have been placed depicting episodes from biblical history in which the intervention of angels plays an important role. For example, there is the painting with the Last Supper, by an unknown artist. It is surrounded by fake marble folders with figures of angels showing the instruments of the Passion. Above the altar is the nineteenth-century wooden crucifix with golden rays, while on the frontal under the altar table stands the tondo on a table depicting the Guardian Angel.

In 2017 the Cassa di Risparmio di Lucca Foundation, in order to preserve and recover this rare jewel of Baroque art and return it to public use and utility, obtained a free loan from the Diocesan Body, owner of the complex, and therefore launched an intense recovery campaign also thanks to the contribution of Azimut Holding SpA, which directly supported the restoration of seven of the nine canvases present.