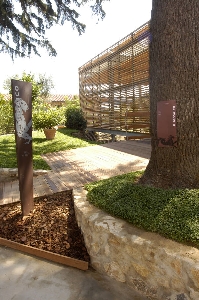 The area surrounding the lake of Massaciuccoli, which in antiquity must have appeared as a vast coastal lagoon, has preserved traces of human presence since prehistoric times. In a period between the Archaic age and the Hellenistic age, the lagoon was occupied by Etruscan settlements with commercial functions (S. Rocchino). This function continued into the Roman Age, when the area, after undergoing works of drainage, must have been one of the landing points on the Versilia coast. On the first slopes and nearly up to the shore on the eastern side of lake Massaciuccoli, at the height of the homonymous village, along with traces of an Etruscan settlement belonging to the Archaic and Hellenistic Ages, we can see the rests of two important complexes dating from the Roman Imperial period, identifiable respectively as a luxurious villa and a station along the road skirting the hills. In the whole surrounding area, a series of findings along the centuries suggests the presence of a small inhabited nucleus and its burial area.
(text by Fabio Fabiani)

Remains can be visited; a selection of findings, as well as the marine mosaic, are exhibited in the local pavilion "Guglielmo Lera".

The Massaciuccoli remains, visible along the centuries, attracted the attention of scholars since the 18th century, when the first excavations began; we have interesting evidence of these in a large oil painting at the 'National Museum of Villa Guinigi' of Lucca, showing the structures and the objects found in life size. More recent works, up to the last excavations in the 90's, have permitted us to recognize in the nucleus of visible quarters on the hill of the Pieve, some rooms of a rich residential villa built on the shores of the lake in the time of Augustus and then repeatedly renovated in the first two centuries of the Empire. The residential quarters occupied the large terrace on which the parish church of S. Lorenzo now stands, while, initially, the lower level was occupied by a garden; the thermal baths, decorated with polychrome marble and enlivened by plays of water, were constructed later; the structures visible today are a part of these and are generally referred to as 'Le Terme'. The residence belonged to the senatorial family of the Venulei, owners of land and earthenware factories in the Pisan territory: their name remains on some plumbing of the aqueduct supplying the villa.
At the foot of the small rise, another building, traditionally called 'La Villa' and only recently identified as a probable mansio, was excavated in the 30's. The complex, only partially visible, seems to consist of a series of rooms overlooking a court, plus others for receiving wayfarers, all linked by a corridor to the thermal quarter decorated with mosaics and marble. From the unheated room, equipped with a basin for cold baths, comes a black and white mosaic representing two couples of fantastic marine animals and a couple of dolphins with knotted tails, datable to the Ist-IInd century a.D.. Maybe the building was a private mansio, designed by the Venulei to make the road skirting the hills more attractive compared to the coastal route and at the same time celebrate the prestige of the family.