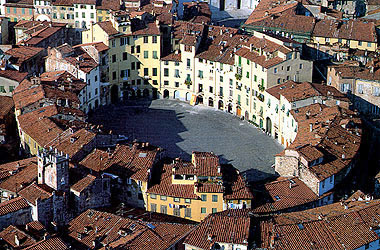 The amphitheatre, where gladiatorial shows and games were traditionally held, was built in Lucca in the second half of the Ist century a.D.. The discovery, during the demolition of some walls, of which we have news in the 19th century, of coins belonging to the reign of Emperor Claudius, suggests that work on the building was begun after the middle of the century. However, the it certainly wasn't finished before the late Flavian Age, when funds were granted by an important citizen, Quintus Vibius, whose rank was that of an "eques" or knight and who, according to an inscription in his honour, found inside the arena in 1810, donated 100.000 sestertii in ten years. Progressively, the original function of the building was lost; with its proportions and position outside the town walls it became a threat to the town itself, as it risked falling into the hands of eventual enemies. It is likely that, from the VIth century a.D., during the Gothic wars and the siege of Narsetes, the amphitheatre was fortified for military purposes and its outer arches closed. Successively, other buildings, used as houses and, for a certain period, even as prisons, were added to the structures that had survived abandon and plunder. Between 1830 and 1839, following a project by the architect Lorenzo Nottolini, the buildings occupying the ancient arena were pulled down and the inner area, its profile slightly adjusted, became the present day piazza.

The remains of the Roman amphitheatre are preserved, incorporated in buildings bordering the present day Piazza dell' Anfiteatro, in the northern part of the town. The elliptic shape of the piazza corresponding, to a great extent, to the area of the ancient arena, is the result of a 19th century restoration that permits us to appreciate the volume and the general outline of the ancient monument. Besides, on the outer perimeter, along the present day Via dell' Anfiteatro, we can see some of the original walls, in particular in front of Piazza Scalpellini and to the north, between the eastern gate, the only ancient one that remains and Via del Portico.

The amphitheatre was built outside the circle of walls, next to the north gate, for obvious practical and functional reasons: in the second half of the Ist century a.D., when the town was already three centuries old, it would have indeed been rather difficult to fit a building of such proportions within an already well established layout; what is more, its position outside the town favoured the access of a great number of spectators arriving both from the town and from the surroundings.
The building, measuring approximately 107 x 79 m. at its widest, rested upon a massive cement base that had been laid out on the entire surface to reinforce the alluvial ground. It was an elliptical ring, divided into 55 rooms, commonly referred to as "wedges". These rooms, placed on two levels and covered with progressively inward sloping vaults, supported the "cavea", i.e. the stands around the arena, where the spectators were seated, reached through internal flights of stairs. Open on the outside, these wedges appeared externally as a sequence of pillars and arches 3,80 m wide and divided into two orders: the lower one had 6,60 m. high arches, whereas the upper only 4,85 m.; the total height was over 13 metres. A low brick gallery, attested by 19th century excavations, closed the wedges internally and defined the space of the arena (67 x 39 m.). The walls were made of concrete, with a plain brick face for the pillars of the lower order and one of white limestone ashlars, alternating with bands of brick, for those of the second order and for the walls of the single wedges. The seam between the two orders, as well as the arched lintels, were also of brick; the latter rested upon moulded stone lists.
The lower rooms, paved with large stone slabs, could be used as secondary entrances or utilities. There were at least two main entrances, at the ends of the major axis of the ellipse. We can still see part of two side pillars, made out of large hewn blocks, at the eastern gate, the only one remaining, opened according to Nottolini's project; upon the cornices we can observe, at the centre, two smaller cornices in low relief; in correspondence of these there were two pilasters, barely visible on the first bricks of the pillars. Evidently, this decoration, as that of the pillars themselves, was never quite completed.
At the eastern entrance, to the left, we can observe different masonry techniques, used in the course of time to close the fornixes: in particular, next to the pillars of the second order, simple cobblestone masonry, certainly older than the one in brick, was employed.
On the whole, Lucca's amphitheatre is simple and functional in its architecture; it lacks an external, ring shaped corridor and even the external decorations are nothing more than simple stone cornices. The fact that the building was never completely finished, as well as the need for the support of a wealthy citizen, show that the town was financially hard pressed in achieving this challenging construction. By the following century signs of the economic crisis were already evident in the loosening and decay of the urban fabric.

• The Roman town of Lucca