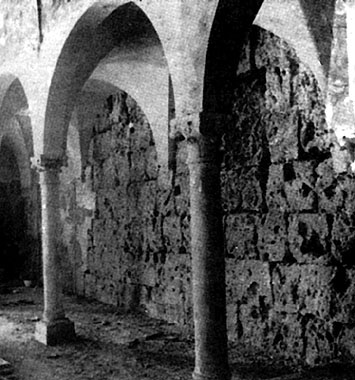 The circle of walls was built at the time of the town's foundation, in the IInd century b.C., probably within a short space of time and with considerable effort of the settlers. Peace was quickly restored and the fortifications gained importance again only from the IIIrd century a.D., when, following a gradual weakening on the frontiers of the Roman Empire, the danger of external invasions newly arose.
In use until the early Middle Ages, the walls were gradually surpassed by the development of the town and probably, in part, destroyed to reuse the stone material, until finally, in the XIIth century, they were definitely replaced by a new circle of walls.

Short stretches of the ancient walls are still preserved in the cellars and foundations of some town buildings, in particular along Corso Garibaldi, Via della Rosa and Via Mordini. The best preserved parts can be seen in the church of S. Maria della Rosa, included in the western wall, while a short section, taken apart in 1935, was placed on the traffic island in Via della Rosa. Finally, the blocks found in Via Pelleria, that can be seen on the lawn in front of the gate of S. Donato, probably belong to the Roman walls.

The walls, about 2700 m. long, were rectilinear on the southern and eastern sides, while they curved slightly along most of the northern one. The building technique adopted was the "opera quadrata" that consisted in the use of big stone blocks, shaped to squares and placed in horizontal rows. Different types of material were used: for most of the raised portion of the walls cavernous limestone was employed, a kind of stone that was easy to cut and could easly be found in the Monti Pisani and Camaiore area; for the portions which have remained on the northern side, instead, the use of hard white limestone from the Monti Pisani, more difficult to shape into square blocks, is predominant. The width of the raised section was an average 2,50 m. and its height at least 7 m.. Apparently, the original fortifications had no towers, except maybe at the junction between the curved and the rectilinear portions on the northern side: here, indeed, underneath Palazzo Andriani, the remains of a yet unidentified structure have been discovered.
Four main gates were placed along the two main axes of the city, cardo and decumanus maximi (Lucca - Roman city ): the first to the east, near the modern Piazza S. Maria, called significantly 'foris portam'; the second to the north, at the crossing of Via Mordini and Via Fillungo; the third to the west, at the crossing of Via S. Paolino and Via Galli Tassi; the fourth, finally, to the south, near the crossing of Via della Dogana and Corso Garibaldi. In the IIIrd century a.D., when Rome itself was surrounded with walls, Lucca's fortifications, again necessary for the town's defence, were revamped.
In 553 a.D. the town resisted for a long time to the siege of the byzantine army lead by Narsetes and, by the end of the century, had become an important Lombard stronghold. The Roman walls remained in use in the early Middle Ages and, as recently suggested, even the peculiar plot of the western side is not due to an extension of this period, but follows the original plan of the fortifications.