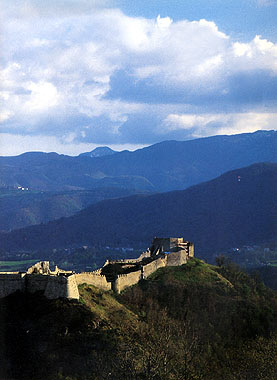 The fortress of Verrucole, beautiful and imposing, is somewhat stretched along the north-east to south-west axis, on a hill above the village of San Romano Garfagnana in front of the Orecchiella Natural Park. During a visit of the fortress we can see the remains of a polygonal tower surrounded by walls, rests of several other structures, a tunnel leading to the underground casemate, the massive circle of walls and two ramparts, one round, the other pointed. The lowest parts of the curtain, taking in account also the morphology of the ground, have two semicircular towers and two gates, the one on the east now stopped. In the Record Office of Modena we can see beautiful drawings of the fortress and its parts together with a plan drawn by the architect M.A. Pasi for the Dukes of Este and one by Captain Costa with the date 1796.

The Municipality of San Romano bought the fortress from "Bresciani & Co." in 1986 for 15 mill. The surviving structures are in good condition thanks to works of consolidation promoted by the Municipality at the beginning of 1990. Archaeological excavations are now under way with the aim of gathering further information about the single buildings.
In 1998 architect Gianclaudio Papasogli Tacca commissioned a project for the reuse of the rocca. The project is now being examined by the Monuments and Fine Arts Office.

Since the Middle Ages the territory controlled by the fortress of Verrucole was contended between the government of Lucca and local noble families like the Gherardinghi; this gave rise to fierce territorial conflicts, extended to the neighbouring Communes of Pisa and Florence. And it was with Pisa that the Gherardinghi, Lords of Verrucole, Vibbiana, Mestiane, San Romano, Naggio, Boglio and Petrognano, formed an alliance against the expansionism of Lucca in Garfagnana. Defeated by Lucca in 1170, the Gherardinghi gradually lost their power and sold most of their lands. So the fortress of Verrucole passed into the hands of the Guidiccioni; then, in the middle of the XIVth century, into in those of Spinetta Malaspina and finally, in 1446, became property of the Dukes of Este. Works of extension and changes to the original round rocca, that had probably stood on the hill since the XIth century, began under the Dukes of Este: the space between the original 'dovetail' Ghibelline merlons was filled in and the tower raised; meanwhile the hill was surrounded by strong walls and equipped with rooms for storing arms and an underground casemate.
During the French invasion, in the XVIIIth century, Garfagnana returned under Lucca and as a consequence Verrucole was dismantled and condemned to a fate of relentless decay, like so many medieval fortresses in the area.