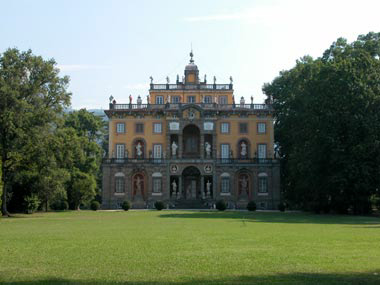 The villa of Camigliano is one of the most interesting examples of 17th century architecture in the Lucchesia and can be considered one of the rare examples of baroque architecture found in villas given its elaborate and original forms. You reach the villa by a long avenue of cypress trees which very scenically frame the gate and villa.
The main façade, facing downhill, triumphant, is characterized by a strong movement given the use of different materials be it in consistency (smoothness or roughness) or in colour. The polychrome appearance of the façade is accentuated by the shadows made by the niches and recesses which contrast with the whiteness of the statues and the light colour of the plaster.
The main divisions of the façade are marked by balusters with statues. The central part of the building has a serliana on the ground floor, which is repeated on the top floor with some variation. The serliana on the ground floor is made of smooth stone, while the pillars of the one on the other floor alternates between ashlars in tufo and stone, which are similar to the ones decorating the lateral parts on the ground floor. The majestic vertical soaring due to the two overlapping serlianas, continues in the central part with an attic surmounted by an aedicule and a cupola.
The house's interior is richly decorated in stucco, which among other things, frames paintings by the Florentine, Vincenzo Dandini. The trompe l'oeil by the Lucchese quadraturist painter Pietro Scorzini are also interesting.
The downhill part of the park was modified during the romantic period, but still mantains the bassin fountains reflecting the façades, that date back to the layout of 17th century French influence. The right hand side of the park gives access to the "secret garden", a garden of parterres which concludes with a nymphaeum. This garden is one of the most beautiful of its kind in the Lucchesia, and is famous for its "waterworks" which are equipped with suitable hydraulic mechanisms, allowing the water to spring out to create an overall scenic effect. On the Sunday immediately following Corpus Domini (2nd June) there is the tradition of making a carpet of flower petals running 700 metres long.

The Santini family bought the villa from the Buonvisi family in 1651.
The building in its present form is the result of modifications carried out before 1710, which was realized on a construction in the second half of the 17th century. The person responsible for the restructuring project of the façade was the Bolognese architect Torregiani. Interior modifications and decoration follow immediately after the work carried out on the façade. Research carried out by Marcello Fagiolo and Maria Adriani Giusti on the original layout of the park, found that Bernardo Raggi and Giovanni Lazzoni among others, worked on it during a period that runs from 1673 to 1686. The strong French influence in its realisation is explained by the fact that Nicolao Santini, owner of the villa, was the Republic of Lucca ambassador to the court of King Sole. In the early 1800's, elements from the romantic period were added to the garden, complying with the fashion of the English garden. Nevertheless, the substantial characteristics of the relationship between the garden and the building were not subverted.