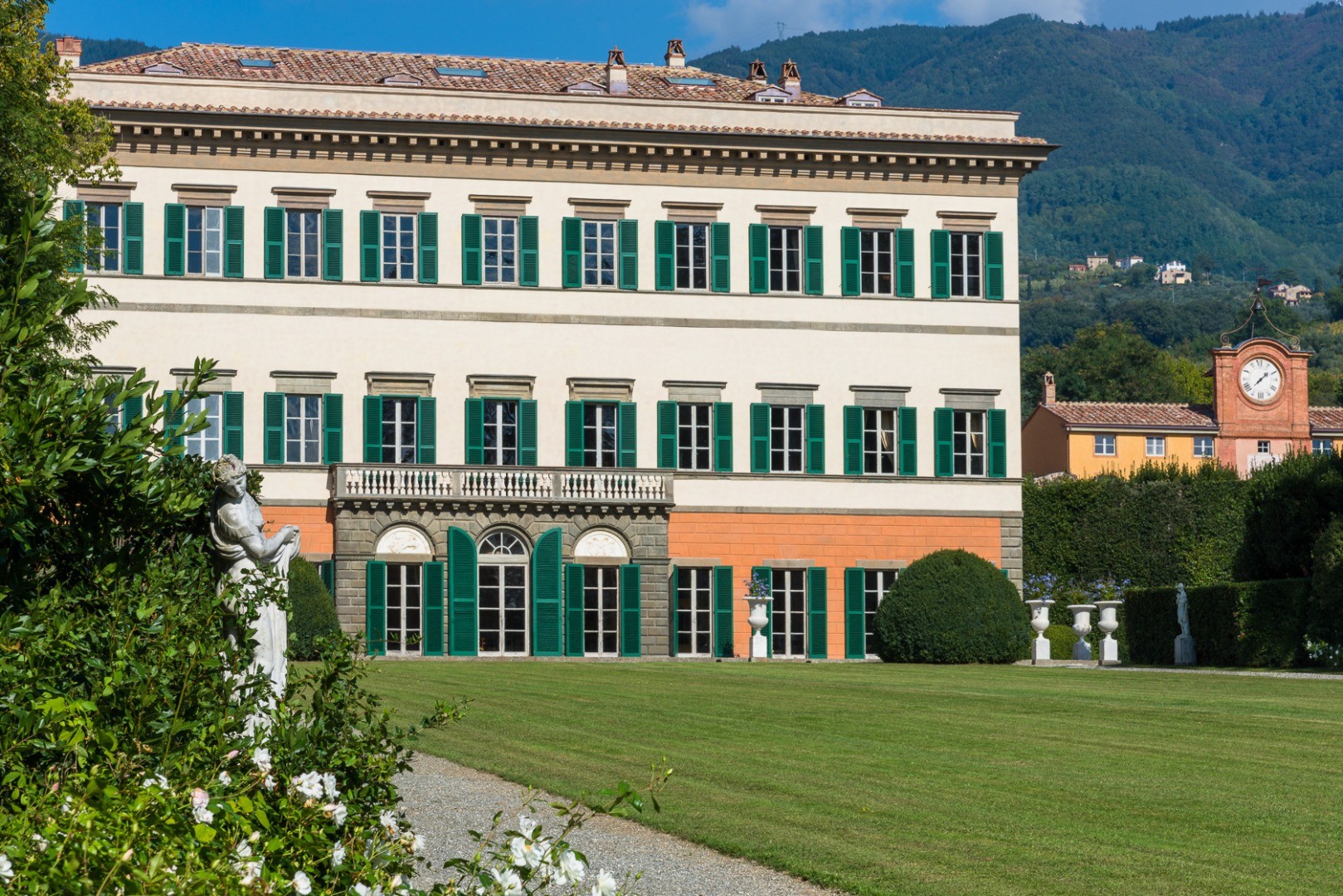 An illustrious property enjoyed by the great and the glamorous for centuries. Few settings in Italy are as rich in allure, beauty and a vivid sense of history as Villa Reale. The timeless elegance of the grounds will charm and delight, perfect for a relaxing walk.
The 17th century Villa Reale di Marlia lies in the heart of Tuscany, near Lucca, in an exceptional location at the foot of the Pizzorne hills. Home in the 19th century to Napoleon’s sister and Duchess of Lucca Elisa Bonaparte Baciocchi, the Villa is encircled by high walls, seemingly protecting it from the passing of time. Villa Reale is considered to be one of the most important historical properties in Italy. The 16-hectare estate includes numerous refined gardens and botanic rarities, as well as majestic buildings created over centuries. The Park features a splendid Water Theatre, the world famous Green Theatre (where the composer Paganini often performed for Elisa Baciocchi), pathways lined with Camellia flowers, and is enriched by a Lemon Garden with a group of marble statues depicting Leda and the Swan, and a Spanish Garden in Art Deco style. In the Parc there are some period residences, such as the 16th century Villa del Vescovo with its nymphaeum, named the Grotto of Pan, and the elegant 18th century Palazzina dell’Orologio with its panoramic loggia. Today, Ville del Vescovo cannot be visited, it is private.
In 2015, huge-scale restoration and restructuring operations were initiated by the current owner, which involved the Villa Reale, the other architectural complexes and the entire park. From 2020 it is also possible to visit the nineteenth-century apartments of Napoleon's sister, never visited in the past. The villa is spread over two floors which are not currently connected to an elevator, which however is under construction.

A visit to the Park of Villa Reale will surprise and delight you. A chance to immerse yourself in an ancient past with roots stretching back to the Medieval age. The extraordinary history of the Villa Reale estate has unfolded across the centuries with a series of transformations, witnessed by illustrious figures and royal dynasties. The first nucleus was formed from a fortress, where the Duke of Tuscia lived during the early Medieval age. The property subsequently passed to the Avvocati family and then to the Buonvisi, a noble Lucchese family of merchants and bankers who transformed the fortress into a magnificent building. After their downfall, the Buonvisi sold the majority of the family properties, including the Villa in Marlia.
The historic residence was bought by Olivieri and Lelio Orsetti in 1651, who carried out modifications to the Villa and recreated the Park in a baroque style with the creation of courtyards, avenues and spectacular gardens, including the Green Theatre and the Lemon Garden. During the 18th century, the Orsetti brothers also constructed the elegant Palazzina dell’Orologio, with its pillared loggia situated above the portico.
It was around this time, in 1806, that Elisa Bonaparte Baciocchi, Napoleon’s sister and Princess of Lucca, bought the property. From this point on, the Villa took the name “Reale” (Royal) from Elisa’s title as Queen of Etruria. The Princess had a strong bond with the residence in Marlia, proceeding with major works which transformed the structure of the building and the gardens. Shortly after the purchase, the Princess incorporated the Villa del Vescovo into the estate, and modernised the façade of the ancient Orsetti Palazzo in a neoclassical style. The entrance to the property was moved laterally, along with the creation of an impressive semicircular space, flanked by two small matching buildings designed by the architect Lazzarini. The Park was also partially redesigned in line with the 18th century fashion for English gardens. The most significant change was the elongation of perspective in the space in front of the Villa. This is characterised by a slight incline to highlight a sense of movement, as per the Romantic taste. The Park of Villa Reale was also adorned with statues and vases created with precious white marble from the Eugeniana Academy of Carrara.
Elisa had to leave the kingdom in February 1814, after the fall of Napoleon. The Princedom of Lucca was transformed into the Duchy, assigned to Carlo Ludovico of Bourbon, and to the mother of Maria Luisa Infanta of Spain. Villa Reale then became the summer residence of the new court, who delighted in organising splendid dances, often hosting distinguished individuals, noblemen and royalty. In 1847, Carlo Ludovico of Bourbon abdicated, bringing an end to Lucca’s political autonomy, when it was annexed to the Grand Duchy of Tuscany. In the second half of the 1800s, the historic residence passed into the hands of the King of Italy, becoming the property of Vittorio Emanuele IInd, who decided to transfer it to Penelope Carolina, the widow of Carlo of Bourbon, Prince of Capua. When she died in 1882, the estate was passed to the two children, Vittoria Augusta and Francesco Carlo, whose mental illness earned him the name “The Mad Prince”. When his sister Vittoria died, the prince was aided by a guardian who dealt with the management of the family property. The Villa Reale estate was put up for sale. Many items of furniture were sold at auction, and many trees within the Park were cut down for timber.
The Count and Countess Pecci-Blunt bought the estate in 1923. The next year they commissioned the famous French architect Jacques Greber for the restoration of the Park and gardens, with the aim of uniting tradition and innovation. Woodland, streams, a lake, and other bucolic features were created to complete and enrich the existing romantic picture created by the classic Italian gardens.
Almost a century later, in 2015, a young Swiss couple bought the by then neglected estate, having fallen hopelessly in love with it. A mere two months later, a terrible storm hit the estate and uprooted many centuries-old trees, complicating the ongoing renovation of the park. Despite the numerous difficulties, the owners decided to accept the challenge of bringing the Villa Reale back to its former glory, initiating significant restoration works.